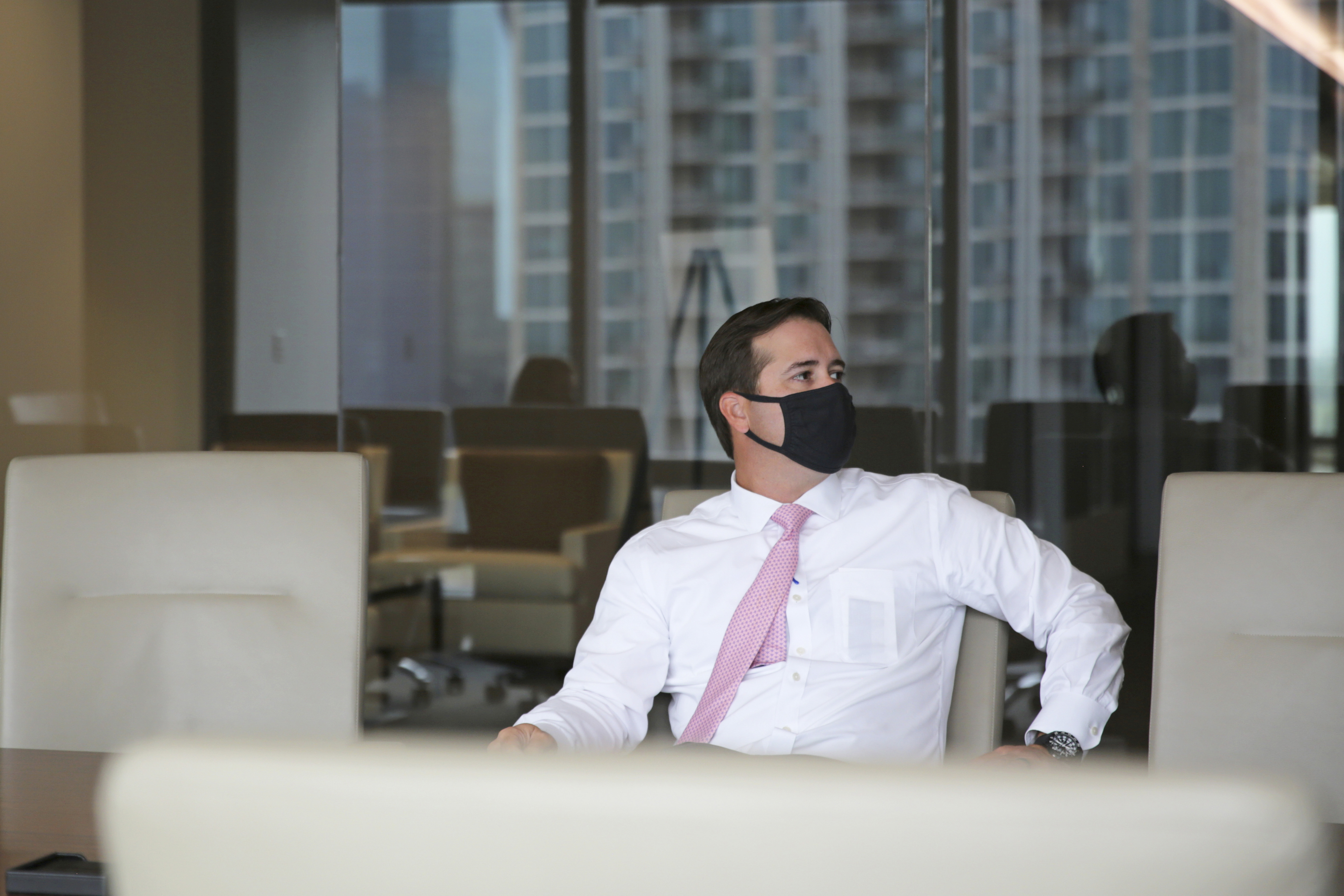 Labor Day marked the end of the total work-at-home era for many American workers, with companies including Apple, Comcast and Peloton clamoring to return to the office after the long holiday weekend.

The unspoken premise behind the edict was that the COVID pandemic as we know it is over — or at least a shadow of what it used to be.

But public health experts say many Americans — and their bosses — are making rosy assumptions about what the rest of the year will look like that aren’t based on science. The reality is that the virus is not likely to disappear immediately, and how severe the next wave of COVID will be remains a mystery.

“Any modeling done more than three to four weeks ahead is pointless,” said Dr. Michael Osterholm, director of the University of Minnesota’s Center for Infectious Disease Research and Policy (CIDRAP), Assets. He added that anyone who says otherwise “probably wants to sell you a bridge.”

“We have so little experience with coronaviruses and how they play out,” he said. “We’re kind of in limbo-land right now.”

COVID be damned – bosses want workers back in the office

More recent announcements about the end of telecommuting have left out COVID entirely. Apple recently set a Sept. 5 deadline for employees to return to the workplace at least three days a week, but gave no COVID-related explanation as to why, such as the virus potentially easing up.

And a memo from Comcast CEO Dave Watson reportedly mentioned the importance of personal collaboration in innovation, but nothing about COVID beyond a statement that vaccines are not required and a request that employees work from home or take time off when they are sick, according to Philadelphia Inquirer and other sources.

While there have been some notable uprisings, it appears that workers with employers willing to get them back into the office are being forced to leave remote work behind — whether the virus cooperates or not.

But bosses could be forgiven for assuming the pandemic is almost over. The White House and the World Health Organization have recently issued statements that some experts believe are overly optimistic.

Global COVID deaths are at their lowest level since March 2020, prompting World Health Organization chief Dr. Tedros Adhanom Ghebreyesus this week to proclaim that the world “has never been in a better position to end the pandemic.”

“We’re not there yet,” Ghebreyesus said. “But the end is in sight.”

And earlier this month, the White House appeared to back away from a grim forecast it issued in May that predicted a fall/winter surge of up to 100 million COVID infections — more than the nation’s recorded total so far — and potentially a significant wave of deaths : died.

At a news conference on September 6, Dr. Ashish Jha, the White House’s COVID response coordinator, that science has “caught up with the virus” and that annual COVID boosters — similar to annual flu shots — are likely in the near future.

But other public health experts are not so optimistic.

“That could be one scenario,” said CIDRAP’s Osterholm. “Another scenario could be that we actually see a new variant emerge that is able to evade immune protection, that is more infectious.”

Aside from COVID-19 and the SARS and MERS epidemics of the early 2000s, scientists have very little experience with coronaviruses, he said — and there’s no reason to say one scenario is more likely than the other .

“What we don’t want to do is give consolation and comforting answers to the public because we think that’s what they want,” he said.

The trouble with projections

In 2020, the idea of ​​predicting a virus like you predict the weather was a new one. Bad virus “weather” ahead? Wear a mask, just as you might wear a raincoat if a storm was expected.

But there’s a reason forecasts are only issued for the next few days — or in the case of COVID, weeks, experts say.

“We’ve gotten very good at projecting what the pandemic is going to look like three, four, five weeks from now,” said Dr. John Swartzberg, professor in the Department of Infectious Diseases and Vaccinology at the University of California, Assets.

“Beyond now — and certainly more than six weeks from now — the accuracy of predictions drops dramatically,” he added. “You get two to three months out and it’s almost like flipping a coin.”

The terms forecasting and modeling are often used interchangeably, but they shouldn’t be, according to Dr. Elizabeth Carlton, assistant professor at the Colorado School of Public Health and member of the state’s COVID-19 modeling team. COVID forecasts predict conditions in the near term – the next two to four weeks. However, projections are more long-term and require scientists to make assumptions.

Thus, any COVID projection more than a few weeks out — like the White House’s dire fall and winter forecast issued this spring — is conjectural and completely uncertain.

A best attempt to look ahead

The short-term US COVID forecasts in the US are mostly positive.

“Most scenarios indicate that hospitalization rates from COVID-19 infection will be similar to current rates or decline slowly over the next few weeks,” the CDC said Assets earlier this month.

Beyond that, however, other public health agencies are careful to highlight the uncertainty in their projections about what will happen over the next few months.

Maria Van Kerkhove, technical lead for the COVID-19 response at the World Health Organization, said Assets this week that “continued” waves of COVID are expected, though she added that it is currently impossible to give a more specific picture.

Carlton believes there is reason for hope this holiday season — hope with a “giant star.”

At the individual level, one’s risk of coming down with COVID is “lower than it’s been for a while,” she said, especially given new Omicron boosters.

While now is not the time to throw caution to the wind and personal precautions should continue, “I think there is some justification for letting your hair down,” she added.

But now is not the time for public health and emergency response officials to take a breather, Carlton noted.

When it comes to the world’s next wave of COVID—and there will be another, experts say—the virus is keeping its cards close. Most of the experts Assets spoke with named subvariants BA.4.6 and BA.2.75 as potential variants of concern worth watching this fall and winter. However, neither variant is currently raising major red flags.

Little is known about the duo of Omicron spawns – including how severe symptoms might be and whether they might be able to avoid immunity from even new Omicron boosters. Both are showing the ability, at least in places, to compete with the globally dominant BA.5 – although neither is making rapid progress so far.

Because some variants like the BA.2.75, also known as the Centaurus, are making slow progress compared to the BA.5, they must have some advantages over it when it comes to portability, Osterholm said.

But he adds that a “sense of humility” is what’s most needed as the U.S. faces another COVID winter.

“For all we know, a Pi or Sigma could appear and replace the Omicron,” he said.

The virus was not always so difficult to predict. In the earlier days of the pandemic, a variant that hit the UK hard would often have the same effect on the US several weeks later.

But now the virus is spawning so many subvariants in so many different places that it’s hard to pinpoint any one in a region and predict if and when it will make its way to the United States, Carlton said.

With BA.5 apparently falling to a relatively low plateau of 60,000 newly reported cases per day, it’s easy to interpret the lull in waves as an end to the pandemic, Swarztberg says.

But we’ve come to that conclusion before—wrongly—and we continue to do so. It’s what Carlton and other experts call the “fear-fatigue” cycle or the “panic-neglect” cycle, both of which involve a lack of proactive precautions and reactivity that often involves too little action, too late.

Last year, the U.S. was in a good place in late September, October and November, Swarztberg said.

“But then we saw a new variant called Omicron in South Africa,” he said. “Within three weeks it was here.”

Previous epidemic coronaviruses SARS and MERS, while far less transmissible, were far more deadly, with fatality rates between 20%-30% versus COVID-19, which is less than 1%, Osterholm said.

But it’s possible, he argues, that COVID-19 eventually evolves to match the lethality of SARS and MERS while retaining its signature transmissibility.

Even if such a scenario never plays out, COVID is currently the fourth leading cause of death in the country — a fact we’ve collectively numbed, according to Osterholm.

“The same number three years ago would have been a ‘house on fire’ moment,” he said.

“The question is, will that number continue to decline gradually, like a soft landing? Stay the same? Potentially go back up with an increase? We just don’t know.”