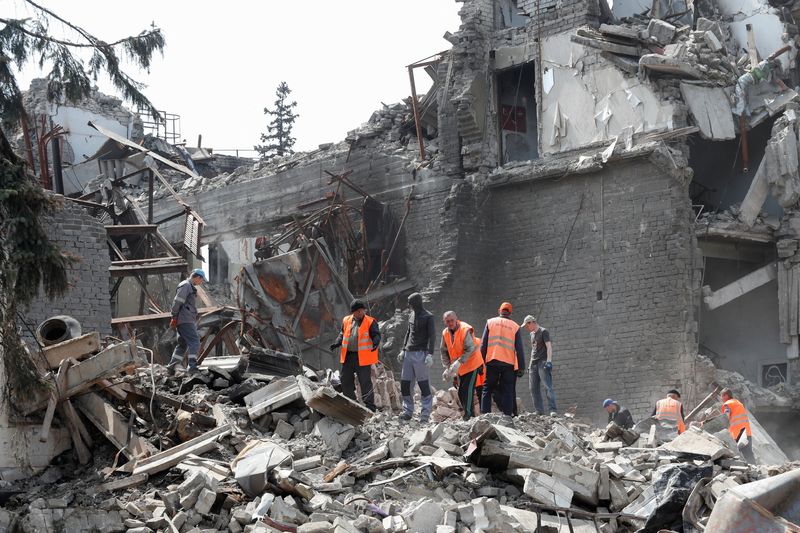 © Reuters. Emergency management specialists and volunteers remove the remains of a theater building that was destroyed during the conflict between Ukraine and Russia in the southern port city of Mariupol, Ukraine on April 25, 2022. REUTERS / Alexander Ermochenko

By Phil Stewart and Pavel Polityuk

RAMSTEIN AIRBASE, Germany / KYIV (Reuters) -USA and its allies met on Tuesday at a German air base to promise new packages of increasingly heavy weapons to Ukraine, which deflected a threat from Moscow that their support for Kiev could lead to nuclear war.

U.S. officials have shifted weight this week from mainly talking about helping Ukraine defend itself to bolder talk of a Ukrainian victory that would weaken Russia’s ability to threaten its neighbors.

They have recently approved shipments of hundreds of millions of dollars in weapons, including artillery and drones, which they withheld from sending in earlier stages of the war, and want their allies to do the same.

“Nations from all over the world stand united in our decision to support Ukraine in its fight against Russia’s imperial aggression,” said Defense Secretary Lloyd Austin, who welcomes officials from more than 40 countries to Ramstein Air Base in Germany, the headquarters of the US Air Force in Europe. . “Ukraine clearly believes it can win, and so does everyone here.”

In a notable shift, Germany, where the government had come under pressure after rejecting Ukrainian requests for heavy weapons, announced that they would now send “Cheetah” light tanks with anti-aircraft guns.

“The real significance of this decision lies not in the difference Gepards can make on the battlefield, but in the signal it sends,” said Marcel Dirsus, a non-resident fellow at Kiel University’s Department of Security Policy.

In a marked escalation of Russian rhetoric, Foreign Minister Sergei Lavrov was asked on state television about the prospect of World War III, and whether the current situation was comparable to the Cuban Missile Crisis of 1962, which almost caused nuclear war.

“The danger is serious, real. And we must not underestimate it,” Lavrov said, according to the ministry’s transcript of the interview. “NATO is basically engaged in a war with Russia through a deputy and is arming that deputy. War means war.”

Mark Milley, chairman of the United States Joint Chiefs of Staff, told reporters as he flew to Tuesday’s meeting that the next few weeks in Ukraine would be “very, very critical”.

“They need continued support to succeed on the battlefield. And that is really the purpose of this conference,” he said, describing the goal as coordinating assistance involving heavy weapons such as howitzers.

Austin, who visited Kiev with US Secretary of State Antony Blinken on Sunday, had said on Monday: “We want to see Russia weakened to such an extent that it can not do the kind of thing it has done by invading Ukraine.”

UN Secretary-General Antonio Guterres visited Moscow on a peace mission, though Kiev and Western countries said they doubted he could achieve much.

Ukrainian Foreign Minister Dmytro Kuleba said that although a diplomatic breakthrough was unlikely, there was hope that Guterres could help the humanitarian situation, especially around Mariupol, where Ukraine says hundreds of civilians are trapped along with the city’s last defenders inside a blocked steelworks.

Kiev and its allies downplayed Lavrov’s remarks about nuclear war, which a British minister called “bravado”.

Russia had lost its “last hope of scaring the world from supporting Ukraine,” Kuleba tweeted after Lavrov’s interview. “This only means that Moscow senses defeat.”

“It’s obviously inappropriate, not constructive and is certainly not indicative of what a responsible (world power) should do in the public sphere,” Kirby said. “A nuclear war cannot be won and it should not be fought. There is no reason why the current conflict in Ukraine should reach that level at all.”

West of Ukraine, there were fears that unrest could spread to Moldova, where Russian troops have occupied a separatist region along the Ukrainian border, Transnistria, since the 1990s. Two radio masts were destroyed by explosions early Tuesday, following other explosions in Transnistria on Monday.

The separatist authorities said they were raising their terror threat level to red, while the Kremlin said it was concerned. The Russian news agency TASS quoted the separatist leader as saying that the attacks could be traced back to Ukraine.

Moldova’s pro-Western president Maia Sandu accused the “escalation attempts” of “factions from the Transnistrian region that are pro-war forces and interested in destabilizing the situation in the region”.

Sandu’s government expressed alarm last week after a Russian top general said Moscow was aiming to seize a path through Ukraine to Transnistria, where he said Russian-speakers needed protection from repression. Moldova, a former Soviet state, has close cultural and linguistic ties with NATO member Romania.

Moscow calls its actions a “special operation” to disarm Ukraine and protect it from fascists. Ukraine and the West call this a false pretext for an unprovoked war to conquer territory.

Russia was forced to withdraw its huge invading force from the outskirts of Kyiv last month, but has since announced new war targets to focus mainly on the east and send more troops there for an attack on two provinces where it supports separatists.

Ukraine’s General Staff said on Tuesday that Russia’s offensive continued in the eastern Kharkiv region, with Russian forces trying to advance on a village called Zavody.

Russia is likely trying to encircle heavily fortified Ukrainian positions in the east, the British military said in an update Tuesday, noting that forces were trying to advance toward the cities of Sloviansk and Kramatorsk.