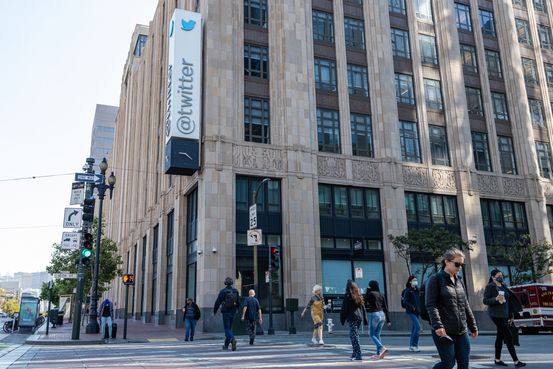 warned staff that the size of bonus payments this year was at risk because of financial difficulties, adding to belt-tightening measures tech companies are implementing during an economic downturn.

The social-media company Friday told employees it had “experienced significant challenges” to revenue since January. It linked those to a variety of factors, including problems in the global economy and others tied to uncertainty over Elon Musk’s $44 billion acquisition of the social-media platform, which the billionaire is trying to abandon.

Twitter last month reported a surprise decline in sales that it blamed on similar factors. The company reported a loss of $270 million, or 35 cents a share.

Twitter, in Friday’s message to employees, said that the pool of potential money available for bonuses, which is based on the business’s performance, has dropped to half of what it was expected to be when the board approved the plan back in January. The warning to staff about the bonuses was earlier reported by the New York Times.

Social media businesses that rely heavily on digital advertising for their sales have been among the tech companies hardest hit by the economic downturn, which has caused some companies to curtail ad spending. It has also caused several social media companies to reassess their priorities.

posted its weakest-ever quarterly sales growth in July and said it would sharply reduce its pace of hiring. Chief Executive Evan Spiegel recently told staff that the company would halt future development on its Pixy drone project as part of a wider redeployment of company resources, The Wall Street Journal has reported.

has moved to give priority to efforts related to the creator economy and away from its Facebook News tab and newsletter platform called Bulletin, The Wall Street Journal reported last month. The company in July posted its first-ever decline in quarterly revenue.

Twitter had already made adjustments in response to the deteriorating business conditions. In May, it paused some hiring and moved to reduce spending on contractors and consultants, travel and events, and marketing, among other steps. In July, the company laid off a third of its talent-acquisition team.

Twitter said the steps it has taken haven’t been enough to counteract the effects of the business downturn.

Some of the actions by the company in recent months, including letting some staff go, have become an issue of contention in the takeover dispute with Mr. Musk. His legal team has argued that the company should have consulted Mr. Musk before taking such steps. Twitter has defended its actions.