IT’S the glittering dance show that brings a dose of glitz and glamor to our Saturday nights.

But over the years Strictly Come Dancing has been dogged by rumors of simmering feuds and backstage shenanigans.

This week reports have emerged of a rift between dancer Giovanni Pernice and partner Richie Anderson.

A source told The Sun that the Radio 2 presenter’s enthusiasm to take part has meant the Italian pro, who won the competition with deaf actress Rose Ayling-Ellis last year, struggles to rein him in during training.

“The couple haven’t clicked,” the source said. “Richie is so caught up in the whole experience that he’s talking 100 words a minute and it can be difficult for Giovanni.

“He’s told friends that Richie talks instead of listening during training and it’s frustrating.” 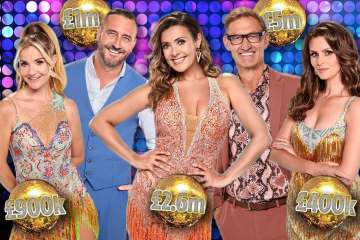 But Richie addressed the rumors by thanking Gio for being “the best teacher over the last fortnight”.

While it’s early days for the all-male pairing, theirs won’t be the first partnership to cause friction.

Backstage tensions have flared in the past between dancers, stars and even the judges.

Here we look at the Strictly spats that have threatened to take the shine off the shining glitter ball.

The partnership in 2018 between the Red Dwarf star and the Welsh dancer was not a happy one, with reports that BBC bosses had to warn Danny about “bullying” towards Amy.

Danny was said to be furious at being painted as the villain and avoided backstage as the cast and crew supported Amy.

A source told The Sun that Danny felt Amy “turned on him” and blamed her for them not being booked on the Strictly Tour.

They added: “They don’t talk, they don’t look at each other, and when they’re not forced to dance together, they’re on opposite sides of the room.”

Amy was left in tears on It Takes Two when he refused to turn up to discuss their Week 7 exit but insisted she never felt “threatened or bullied by him”.

Danny later addressed the feud, saying the BBC hid the truth about an injury sustained by Amy, which meant he was rehearsing with a stand-up.

“The week I made the mistake of everyone coming down like a ton of bricks, the judges knew I hadn’t danced with my partner that week,” he said.

Danny and James got into a bitter war of words in 2015 after the EastEnders star was pictured in the audience supporting his on-screen wife Kellie Bright, as well as appearing in a number of music videos.

James, who had left the show two years before, tweeted: “Is Danny Dyer on Strictly???” to which Danny replied, “Yeah like you……oh….wait….”

As the spat intensified, Danny accused the former Strictly pro of living off wife Ola’s earnings, tweeting: “The moment your wife pays the mortgage and utility bills. #teamman.”

James shot back, “Don’t forget the vacations and the cars… Unlike you, she didn’t blow all her money up her nose.”

Reports of tension between professional dancers Katya Jones and Nadiya Bychkova emerged while the dancers were on the Arena tour earlier this year.

Sources told The Sun that Katya, 32, was unhappy with the attention Nadiya was getting after she began a romance with colleague Kai Widdrington.

A source told The Sun: “Katya is used to being the one everyone is talking about on the show and has struggled a bit this year.

“Nadiya has become the hot topic of this tour, leaving Katya to tell friends she’s a little jealous.”

In March, there were further rumors of a backlash against the Russian dancers Katya and Luba Mushtuk in connection with the war in Ukraine. Nadiya and colleague Nikita Kuzmin are Ukrainians.

A backstage fight between Ola Jordan and Kristina Rihanoff was reportedly behind both professionals leaving in 2016.

The stunning dancers were fan favourites, but reportedly made it difficult for their fellow dancers as a jealous feud brewed backstage for two years.

“Ola and Kristina were friends but jealousy took over and it created an incredibly uncomfortable atmosphere,” a Strictly insider told The Sun.

Kristina later blasted the rumors as “stupid,” adding, “I have a great relationship with everyone on the show.”

The animosity even bubbled over to the New Zealand version, where they were both on the judging panel.

Brendan was rejected from Strictly in 2018 and a year later Craig claims he offered him an olive branch by inviting him to lunch – but it didn’t go down well.

“I hadn’t spoken to him in years. I thought, ‘Wouldn’t it be nice to see Brendan, just to see if he’s working’,” he told Kate Thornton on her White Wine Question Time podcast.

“At least he had an electric car. He showed that. We hated each other.”

Presenter Fern took part in the show in 2012 but had a frosty relationship with partner Artem.

Three years later, she claimed the Russian pro used to “kick” and “push” her during rehearsals.

She told The Times: “He was like, ‘Keep your face. Go home before I kill you.’

Artem denied the claims and insisted he treated Fern with “respect and genuine care”, saying her comments did not reflect “every situation” he recognised.

The MasterChef star was voted off first in the 2014 season and immediately blamed her dance partner.

“I love to dance, but if I was paired with someone who liked me, I would have done better,” Greg said.

In response, Aliona retweeted a series of messages urging her to get a better partner in future series, with selected messages including “could someone please give Aliona a decent partner next year”.

The following year, she lifted the glitter ball with The Wanted star Jay McGuinness before leaving the show.

Rock singer Anastacia was recovering from breast cancer treatment when she took up the challenge in 2016.

But she reportedly fell out with Brendan after the rigorous training led to her painfully tearing her mastectomy scars.

She later admitted they clashed, saying: “We’ve definitely had some conversations, I’m not going to lie about that.

“I think we’re both two very strong-minded individuals in a process, but we get along very, very well.”

Two years later, she admitted she was still in regular contact with almost everyone from the show except Brendan, and didn’t message him when he left the show.

Brendan was paired with Sixties legend Lulu in 2011 and made her want to scream after they fell out in training.

She later revealed: “I was working with someone [on Strictly] which I wasn’t really compatible with, so it was very difficult.”

Brendan claimed that Lulu “wasn’t a very nice person” when they worked together and branded her his worst partner ever during an interview on Loose Women.

“It’s blooming terribly,” he said. “But she felt the same way about me, so it’s okay.”

Original judge Bruno was replaced by Anton in the 2021 series as travel restrictions made it difficult for him to fly from Los Angeles, where he judges the American version.

This year the change became permanent, but there were rumors of a feud as Bruno commented: “Good for him. He needs the money.”

Anton denied the feud rumors and said that Bruno was only joking.

He admitted that he hasn’t spoken to Bruno since he got the referee job.