Reason: The series will follow Captain Pike, Science Officer Spock and Number One in the years before Captain Kirk boarded the USS Enterprise while exploring new worlds around the galaxy.

Review: One of the elements of the current Star Trek revival on Paramount + is that each series upgrades the expectations of the main franchise. As created by Gene Roddenberry, the original Star Trek was an episodic adventure through space focusing on the utopian ideals of the USS Enterprise crew. Roddenberry’s follow-up series, The next generationmaintained these themes for a new generation, along with Deep Space Nine, Voyager, and Enterprise. It was first Discovery debuted in 2017 that we got a comic book drama with a fresh look and feel. Now, after an animated series and TNG era, Paramount + returns to Enterprise for a series focused on Anson Mount’s portrayal of Captain Christopher Pike as introduced in Discoverysecond season. Star Trek: Strange New Worlds returns to the independent, episodic character of Gene Roddenberry’s original series, but with a revisionist twist that makes it both refreshing and nostalgic at the same time.

The shift from serial narration to episodic narratives is noticeable right from the beginning of the premiere episode of Snarrow New Worlds. For those familiar with Anson Mount’s race as Pike, the Enterprise captain saw a vision of his own death while visiting a Klingon convent in the second season of Discovery. That sight haunts him and prevents him from resuming his command until an emergency signal from number one (Rebecca Romjin) pulls Pike back to her chair on the bridge. Spock (Ethan Peck), who spends time with his significant other on Vulcan, also joins the retrofitted Enterprise as it sets out to rescue Number One. The premiere episode does a good job of introducing the entire ensemble crew on the ship, including the classic characters Christine Chapel (Jess Bush) and cadet Nyota Uhura (Celia Rose Gooding). The rest of the cast are new creations, including Babs Olusanmokun as Doctor M’Benga, Bruce Horak as blind Aenar chief engineer Hemmer, Melissa Navia as ensign Erica Ortegas and Christina Chong as security chief La’an Noonien-Singh. At last, it does not take long before La’an’s connection to Khan is recognized along with several other connections to the classic Star Trek original series.

The diverse cast repeats Gene Roddenberry’s original vision for Star Trek, including having a woman as deputy commander. Romjin is excellent both as a confidant to Pike and as a leader of the crew. She continues the great tradition with number one going back to Spock, Riker and even her forerunner played by Majel Barrett Roddenberry in The Pilot from 1966. She works well with both Anson Mount and Ethan Peck, something we saw in their scenes below Discovery, but all three actors interact well with the entire ensemble crew. Each episode provides character development and background story for each crew member, with an extra focus on La’an and Uhura in the early episodes, while also providing insight into Nurse Chapel and Doctor M’Benga.

The first five episodes of the first season of ten episodes were made available for this review and feature Trek characteristics, including an away team separated from the main crew, costumes for the Starfleet crew to mingle with a native planet, conflicts that require specific crew members to use their expertise, which also delivers character development, and socially relevant plots that repeat our contemporary world. Basically, this new series is so close to the original Star Trek as any series has been, while it has also been enhanced by a larger budget and enhanced special effects. However, it is a double-edged sword as there are some episodes in this batch that do not work quite as well as others. I appreciate the recalls to classic Trek like the reptile Gorn and the memorable Kirk / Spock fight scene (and music!) from the episode “Amok Time”, but there were many moments when I watched these episodes where I felt the nostalgia outweighed the quality of the story. I was also split between wanting a more serialized structure in relation to these more independent episodes.

The series is solidly directed by a team of filmmakers, with each episode showing a different helmer. Starting with Akiva Goldsman in the first episode, the series maintains a consistent style through each individual narrative, associated with tangential underplots and revelations from week to week. It’s nice to be able to jump in without having to have seen each episode, but watching them in sequential order gives more insight into who these characters are. The production values ​​are more in line with 1966 Trek than Discovery or restart the big screen with just enough technological enhancements to prevent it from looking silly. Enterprise is a very own central character and references to parts of the ship, approaches that tease Captain Kirk’s final command, and more give a sense of familiarity to this show. Composer Jeff Russo often refers to the original Alexander Courage theme music, and the officer logs described make this show the trekkiest of all Star Treks to date.

Star Trek: Strange New Worlds offers nothing revolutionary or different than the expanding canon of Gene Roddenberry’s creation, but it gives us the next best thing to a revival of the original series. With idealistic characters, a sense of fun and hope mixed with intense independent stories, this series feels like a return to the kind of science fiction storytelling that Star Trek always wanted to show despite being hampered by the film technology of the time. Star Trek: Strange New Worlds feels familiar and comforting in a way that Discovery and Picard refrain. This series is a refreshing return to the original style of Star Trek through a 21st century lens in a way that JJ Abrams’ big screen reboot was unable to replicate. This is a fun and entertaining show that made me smile the whole time I saw it. Trek purists will love this show, and I hope new fans do too. 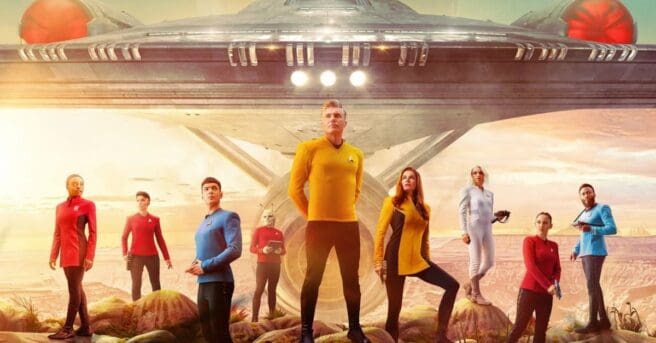