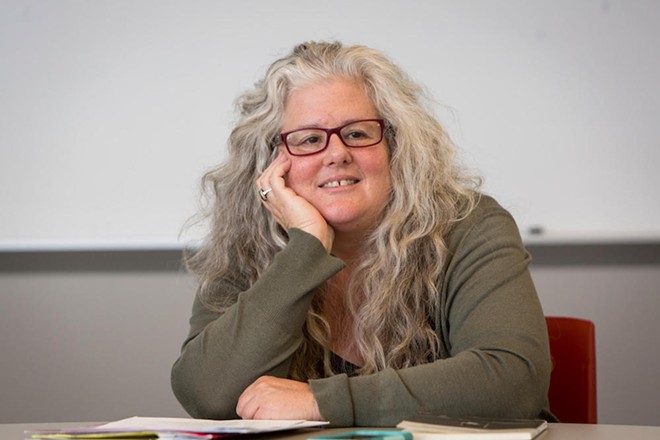 I missed the poet Dana Levin’s call when I drove an illegal U-turn at the Grand to go to Arsenal. It turned out that the coffee shop where we had agreed to meet in Tower Grove South closed early. She had gotten there on foot, so I offered to pick her up and try somewhere else. We came to another cafe on the Grand just as they were also closing. At this point, we clenched our teeth together and headed to Starbucks as company coffee if nothing else is reliable.

We sat on the outdoor patio for a few minutes before realizing it was too windy and noisy to record our interview. Levin grabbed his croissant as we rose to our heads and immediately dropped it on the ground, adding to the afternoon’s fateful pile of small, unfortunate events. We laughed to stop shaking our fists at the sky.

“Now do you know where you are ?!” she exclaimed. I laughed even harder at the self-reference.

You now know where you are is Levin’s fifth full collection of poems, published April 19 by Copper Canyon Press. It’s as much about navigating any given series of frustrating curveballs in modern life on a sunny spring afternoon as it’s about the Trump presidency, about the pandemic, about all the things we mean when we say ‘with everything, that’s going on now. ” But Levin has been asking these huge questions since his first book, the 1999s In the Surgical Theaterwas chosen by the as yet non-Nobel laureate Louise Glück for the APR / Honickman First Book Prize.

In the book’s poem “Smoke” the speaker asks “[w]here we go, my nation, my beloved, into this well of water, where we will drown until spring. “More than 20 years later, Levin is still trying to reach the best questions, though answers seem to remain elusive.

In the summer of 2017, Levin moved to St. Louis. Louis from Santa Fe and found himself in a literary scene that thrived, but mostly in the pockets that so many art scenes seem to be in the Midwest. Levin recalls a conversation at a reading in the late, large Fort Gondo on Cherokee Street, where she had mentioned feeling delighted by this hidden gem of a city.

“Yeah, do not tell anyone,” she joked. This gave Levin a break. “So the quality of ‘do not tell anyone’ creates wonderful intimacy and a personal atmosphere,” she said during our interview, “and I wonder if it also hinders certain forms of expansion.”

As an example, Levin is interested in better and more funding as a board member of the Saint Louis Poetry Center and as a co-host with Jen Tappenden of this organization’s leading reading series, Observable. When I asked Levin about her philosophy of being an artist who also feels responsible for civic engagement, she brought up a topic that weighs on her these days: a poet’s internal, personal work to honor a lyrical impulse. These were her thoughts throughout the writing of her new collection of poems. She is currently working on a new prose book about her childhood.

“The only thing that keeps me going is the belief that the inner work means something to the collective,” she says. “I really believe it does, if you do it honestly, and it’s not about navel-gazing or preserving your neuroses. I really mean wanting to have a revolution inside the self and use the poetry to make it happen. to happen? It means something! ”

If this inner revolution sounds openly spiritual, it is. Repeatedly throughout our interview, Levin referred to himself as a “vessel” for his poems as well as for positive social change. She seems to compose herself out of a vibrant mix of healthy skepticism, self-destructive humor and self-confidence without ego. This mixture is wisdom gained by knowing one’s place in one’s life and in the lineage of one’s honor. With a work grounded in the present and very conscious of its ancestors, Levin hopes that this internal lyrical impulse can be the work of prophecy. 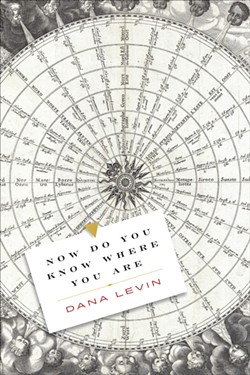 Dana Levin’s latest poetry book, Now You Know Where You Are.

Allen Ginsberg is an archetype for this. In 1954, Ginsberg began writing and performing “Howl,” a long poem now considered a classic in American poetry. At the time, however, it was not received as such, and ended up in court as the subject of an indecent trial. What still draws Levin to the poem as an artistic object of expression is its prophetic nature. Ginsberg himself, in an interview with Paris review in 1966, discusses prophecy as emotion to an emotion that most people have not yet felt, but which is about to do so. Or at least that’s how Levin paraphrases him.

“And it’s just a feeling Ginsberg has … It also comes from this lyrical impulse, this kind of strange way where you go into the self and you really start listening and you get past the ego, and then you’re just a vehicle, “she explains. “And the future can come through, and change can come through. It’s activism for me.”

For Levin, the personal and artistic and political are not easy to distinguish.

“You know, there are a lot of conversations right now about, ‘Can poems really change the world?'” She says. “And it’s such an interesting thing to ask poetry to do … American culture is constantly asking, ‘What is it good for?’ means, ‘What use can be made of it?’ So sometimes when we talk about poetry and activism, I get a little suspicious of how much we’ve internalized this idea, [poetry’s] must be ‘good at something’, otherwise it is not good. ”

She seems to think that this suspicion applies to herself just as much as we do. Even as her books are published by the prestigious Copper Canyon Press, Levin has found herself as his own communications manager. In a contemporary world where poetry is not considered as commercially viable in the US market as just about any other genre, less pressure focuses scarce resources on keeping the light on, leaving little to an equally well-established poet as Levin. She recently experienced an internal dissonance due to this market reality for her art: an unwillingness to even see her book as something for sale.

“My box of books came and I did not want to open it … In the meantime I’m starting to feel really weird and upset and sick and not okay and I do not know what’s happening to me .. and so I thought I: ‘We’ll take these books out of the box,’ she says. “And I did, and I started crying hard, and I realized I had spent the last two weeks dealing with my book as a product. I had not let myself have the experience of taking it out of the box and saying, ‘Oh my God, I made this thing!’ ”

As our conversation progressed, we repeatedly circled back to the idea that we seem to be afraid to communicate privately with ourselves, something we have become less accustomed to as a culture. You now know where you are, advance reviews, have received virtually universal recognition, and this writer does not disagree with that praise. But when even that does not seem to be enough for us, when the book release is missing a dramatic unboxing video or a gentle stream of postings on social media in the weeks before the release date, we may have to be honest about where we are now, approx. our priorities on how we best respond.

“How to Hold the Heavy Weight of Now,” from the new collection, ends in a picture of the speaker counting on that response. The simple but not immediately intuitive answer is generosity:

body forward, I saw them

let a bird go, I saw my hands