Title leader Max Verstappen finished seventh after a frustrating race that included a major error from the Red Bull driver.

Verstappen can win the title in Japan next Sunday but will need the results of Perez and Leclerc to go his way.

However, Perez is under investigation for a safety car violation.

Race stewards must decide on any penalty after the race. If he gets a time penalty, he could lose the win.

Lewis Hamilton also had a difficult night under the Marina Bay lights, finishing only ninth after two mistakes.

The seven-time champion had been stuck behind Ferrari’s Carlos Sainz, who took the final place on the podium, having lost a place to the Spaniard at the start. He made a mistake trying to get close enough to pass, running wide at turn seven and damaging his front wing.

Another mistake, running wide at Turn 14, allowed Verstappen to pass him for seventh.

Verstappen’s mistake was the same. He attempted to pass McLaren’s Lando Norris after a restart from one of five safety car periods, two real and three virtual, but locked up and slid straight ahead, also at turn seven.

Verstappen needed eight points on Leclerc – the difference between a fastest-lap victory and second place – and nine on Perez to win the title at Suzuka on Sunday. 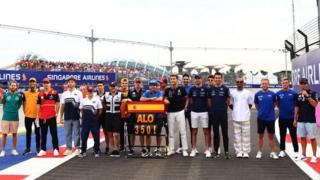 Before the race, all 20 drivers came together for a photo to celebrate Fernando Alonso’s 350th race start

How did the race develop?

It was a slow-burning race at the front, despite the number of incidents, after a heavy downpour about an hour before the scheduled start led to a delay of around the same time and a start on a wet track.

Drivers found the track very slow to dry and it was only after half the distance that it was suitable for slick tyres.

This coincided with the final safety-car period and all the drivers came in for slick, dry-weather tyres, signaling the time for the race to come to life.

Perez and Leclerc pulled away in the distance from the start as Sainz struggled in the wet conditions, with Hamilton close behind and Verstappen behind.

Verstappen was able to quickly regain the four positions he lost with a slow start, but then hung on in seventh behind Fernando Alonso’s Alpine until it retired from an engine failure on lap 22, and then Norris.

Perez had begun to pull away from Leclerc as the intermediate tires wore down, but Leclerc was clearly faster immediately after the final restart and began to pile on the pressure.

The Ferrari came close a couple of times on the straight down to Turn 7, but was not quite able to make an overtaking attempt on a track where overtaking is notoriously difficult.

But the battle ended on lap 48, with 20 minutes remaining in a race limited to a maximum of two hours, when Leclerc made a mistake at Turn 16, running wide and losing around a second to Red Bull.

He was asked to stay within five seconds because they believed the Mexican could be penalized for a safety-car infringement – he didn’t stay within 10 car lengths of the safety car on the second restart after being cautioned for the same offense on the first one.

He managed to build the gap and finished 7.6 seconds behind, but the stewards will decide on the attack later.

Sainz drove a steady if anonymous race to finish third, well off the pace of the drivers. And Norris was strong in the McLaren, having passed Alonso at the start to take fourth and benefit from the mistakes of Hamilton and Verstappen.

It was a good day for McLaren in their battle with Alpine for fourth in the Constructors’ Championship, with both Alpines retiring with engine failure as Norris’ team-mate Daniel Ricciardo finished fifth.

The Australian, who is likely out for an end-of-season drive after being dropped by McLaren, was running out of points until the final safety car period when McLaren delayed his stop and he jumped up the field as a result.

George Russell finished outside the points in 14th after a play on an early switch to slicks went wrong because the track was too wet and later an incident with Mick Schumacher dropped him back.

Alonso’s engine failure caused the second, a virtual safety car, followed by another VSC four laps later when Alex Albon crashed and left his Williams front wing in a barrier, and a third two laps after that when the engine of Esteban Ocon’s Alpine exploded in a cloud of smoke.

The final safety car was caused by Yuki Tsunoda crashing his Alpha Tauri.

The extent of abuse by politicians on Twitter revealed