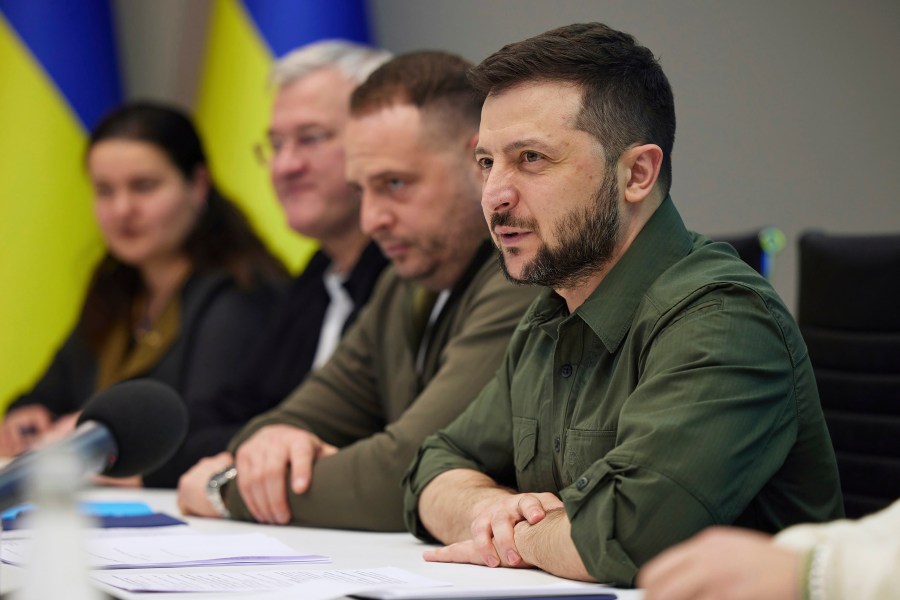 KYIV, Ukraine (AP) – Top US officials on Monday promised to help ensure that Ukraine wins its battle against Russia after face-to-face talks with President Volodymyr Zelenskyy in Kiev, while Britain said Moscow has not yet achieved a significant breakthrough in its offensive in Ukraine’s eastern industrial heartland.

In meetings with Zelenskyy, US Secretary of State Antony Blinken and US Secretary of Defense Lloyd Austin said the United States had approved a $ 165 million sale of ammunition for Ukraine’s war effort, along with more than $ 300 million in foreign military funding.

“The strategy we have put in place – massive support for Ukraine, massive pressure on Russia, solidarity with more than 30 countries committed to these efforts – has real results,” Blinken told reporters in Poland the day after the meeting with Zelenskyy and others. Ukrainian officials.

“When it comes to Russia’s war goal, Russia is failing. Ukraine is succeeding. Russia has sought as its main goal to totally subjugate Ukraine, to deprive it of its sovereignty, to remove its independence. It has failed.”

As fighting continued, Russia struck deep into Ukraine, targeting infrastructure far from the front line, according to Ukrainian and Russian reports.

In a series of attacks on Ukraine’s railways, a Russian missile hit a facility near Krasne, outside the western city of Lviv, early Monday, triggering a fire, the region’s governor said. A total of five railway facilities in central and western Ukraine were hit by Russian strikes, says Oleksandr Kamyshin, the head of the state-run Ukrainian railways.

Meanwhile, Serhiy Borzov, the governor of Ukraine’s central Vinnytsia region, said there were victims of rocket attacks targeting “critical infrastructure”. It was not clear whether these strikes were related to the attacks on the railways.

He added that other attacks with long-range missiles overnight hit concentrations of troops and weapons and ammunition depots in Barvinkove and Nova Dmytrivka in the Kharkiv region, near the Russian border. In all, he said, Russian warplanes destroyed 56 Ukrainian targets.

North of Ukraine, in the Russian region of Bryansk, a fire broke out in an oil depot early Monday, but no immediate cause was given for the fire in oil storage tanks.

NASA satellites tracking fires showed that something was burning at coordinates corresponding to a Rosneft plant about 110 kilometers (70 miles) north of the Ukrainian border. Moscow has previously blamed Ukraine for attacks in Bryansk.

After meeting with Blinken and Austin, Zelenskyy said he was “very grateful” for the US aid and especially praised US President Joe Biden for his “personal support”.

“The priorities are weapons and support from the United States and our partners, European leaders, in terms of our army’s strength and support in certain areas,” the Ukrainian president said. “The second issue is the sanctions policy against the Russian Federation because of the full-scale invasion and all the terror they have committed in Ukraine.”

The three-hour meeting came on Sunday, the 60th day since the start of the invasion, as Ukraine pressed the West for more powerful weapons against Russia’s campaign in the Donbas region of eastern Ukraine, where Moscow’s forces tried to oust the last Ukrainian troops in the country. the battered port city of Mariupol.

The British Ministry of Defense said on Monday that Ukrainian troops, hollowed out at a steelworks in the strategic city, tied up Russian forces and prevented them from being added to the offensive elsewhere in the Donbas.

“Many Russian units remain permanent in the city and cannot be relocated,” the ministry said in a statement on Twitter. “Ukraine’s defense of Mariupol has also exhausted many Russian units and reduced their combat efficiency.”

The ministry added that Russia has so far made only “minor progress in some areas since it shifted its focus to fully occupying the Donbas.”

“Without adequate logistical and combat support resources in place, Russia has not yet achieved a significant breakthrough,” the ministry said.

With Russia’s shift in focus, Austin said Ukraine’s military needs are changing, and Zelenskyy is now focused on more tanks, artillery and other ammunition.

“The nature of the fight has evolved because the terrain they are now focused on is a different type of terrain, so they need long-range fires,” Austin said.

Asked what the United States sees as success, Austin said that “we want to see Ukraine remain a sovereign country, a democratic country capable of protecting its sovereign territory, we want to see Russia weakened to the point where it can not do things like invade Ukraine. “

On the diplomatic front, UN Secretary-General Antonio Guterres was scheduled to travel to Turkey on Monday and then to Moscow and Kiev. Zelenskyy said it was a mistake for Guterres to visit Russia before Ukraine.

Blinken said he had spoken to Guterres on Friday prior to the trip.

“Our expectation is that he will bring a very strong and clear message to Vladimir Putin, which is the need to end this war now,” he said.

As a boost in support for Ukraine, French President Emmanuel Macron comfortably won another term on Sunday over far-right challenger Marine Le Pen, who had promised to dilute France’s ties with the EU and NATO. Le Pen had also spoken out against EU sanctions against Russian energy and had been investigated during the campaign over her former friendliness with the Kremlin.

Since the Russians failed to conquer Kyiv, the Russians have aimed to gain full control of the Donbas, the eastern industrial heartland where Moscow-backed separatists controlled an area before the war.

For the Donbas offensive, Russia has gathered troops fighting around Kiev and in northern Ukraine again. The British Ministry of Defense said Ukrainian forces had repulsed several attacks in the past week and “inflicted significant costs on Russian forces.”

In the southern part of the Donbas, in the strategic port city of Mariupol, a small pocket of Ukrainian troops continues to withstand Russian forces in the Azovstal steel plant, an extensive waterfront facility.

Over the weekend, Russian forces launched fresh airstrikes on the steel plant in an attempt to disperse the estimated 2,000 fighter jets inside. It is estimated that 1,000 civilians are also housed at the factory.

New satellite images of Planet Labs PBC, taken Sunday, show destroyed buildings across the steelworks and smoke rising from an area. Roofs have gaping holes; a football field is cratered from incoming fire.