THIS MULTI-media production is not a Disney-fied, sugar-coated version of ‘The Jungle Book’ – instead it is a perfect attack on the senses, using every conceivable effect to engage and captivate the audience. Inspired by Rudyard Kipling’s Jungle Book series of stories, originally published in 1894, this production takes place in a post-apocalyptic world, where global warming has caused lands to go under water, forcing the human population to seek after higher ground.

A small child finds himself separated from his family and ends up in a land where animals of all shapes and sizes have taken over and formed a troubled alliance while trying to navigate the new world order without humanity. The child is taken in by a pack of wolves and given the name Mowgli. The wolves are threatened by another human, a hunter, who keeps them in constant fear. Mowgli is kidnapped by Bander-log – former laboratory monkeys that humans had subjected to all sorts of experiments and who now wants Mowgli to teach them how to become humans themselves. 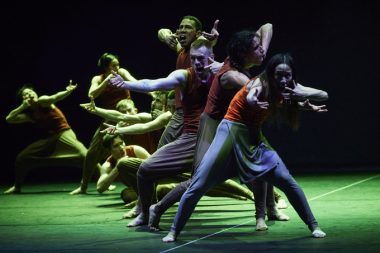 With the help of Kaa, a python, Mowgli is rescued by the panther Bagheera and Baloo, a dancing bear, and returns to the pack of wolves. But as the hunter gets closer to their territory, they realize that the fragile peace the animals have created is threatened again – can Mowgli save them?

Director and choreographer Akram Khan cleverly puts together a sound image created by composer Jocelyn Pook with digital animation by Adam Smith and Nick Hillel and live action from his extraordinary dance company to create a compelling and thought-provoking piece with images that pop into your head for a long time. after the curtain has gone down.

The scene is fronted by a barely visible gauze on which beautifully animated line drawings are projected. This effect allows the performers to dance seamlessly in the animations, allowing them to interact with giant elephants, birds and other creatures, create stormy seas and shoot arrows across the stage.

The animations are amazing in their simplicity – birds flying, leaves soaring gently to the ground, water rising, a herd of elephants crossing before our eyes. It’s all so believable that I saw my eyes water when the hunter shoots Chili – the Dragon who has been watching over Mowgli – and a flock of birds come to carry him to the sky. 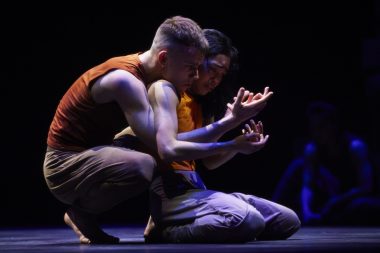 The animated scene in the beginning has the child hovering on a raft in stormy seas with his parents, repeating the migrants’ travels. As the child fell off the raft and into the depths of the sea, the audience collectively held their breath until she struggled up to the surface. Later, the hunter is ‘drowned’ in a sea, which perfectly combines live action with animation, so you can not see where the digital effects end and the ‘real’ action begins.

Pook’s soundtrack is utterly fascinating – mixing music and sounds from different cultures, including Indian song, chants and at one point Latin with words and phrases related to global warming, such as activist Greta Thunberg’s famous ‘How dare you?’ talk. Mixed with the sound of the jungle are news announcements about the global warming disaster as well as dialogue that tells the story.

Khan’s dancers use this soundtrack as their ‘music’ – moving to the rhythms created by the voices and dancing through the dialogue. The costumes are minimal and the dancers are dressed uniformly and rely on their movements to convey what animal they are portraying. For the most part, this works well – the physical and synchronous nature of the dancers is breathtaking, but sometimes I struggled to figure out who was who – when there was so much to take in visually, some of the more nuanced, subtle elements became gone.

The technical requirements for this production are enormous – the hat off to the whole team behind the scenes to make it all work.

Jungle Book Reimagined is a unique collaboration, not just between different creative media, but also between a veritable who is who of production partners, all of whom should be congratulated for their vision of supporting this innovative and groundbreaking production.