Tamara Nisbeth wants you to know that Reggae Pot means reggae music paired with tasty food in pots. “Not that kind of pot. We don’t put weed in our food,” she notes.

Which is kind of ironic considering that in 2015 she opened the original brick and mortar Reggae Pot in Colorado Springs right next to a marijuana dispensary. When the pharmacy needed Nisbeth’s footprint in the mall to expand, it allowed her to operate a food truck right outside the pharmacy door, next door to the only other tenant, a liquor store.

But by 2020, Nisbeth knew she needed more space, and in May 2021, she moved the restaurant to 7562 South University Boulevard in Centennial.

“You can really tell her food is made with love. It just has this homemade feel,” says customer Greg Hartley, enjoying a plate of jerk chicken made with Nisbeth’s spice blend, which includes native Jamaican Scotch Bonnet peppers. Nisbeth was born in Montego Bay, where she earned a cooking certificate. She moved to America in 1999 and spent the next ten years honing her culinary skills. She also married, had three children, and then divorced. In 2010, her daughter needed $2,500 to go on a school trip — money, Nisbeth says, she didn’t have.

“Single moms find a way, right? I noticed there weren’t many Jamaican restaurants around, and I love to bake,” she recalls. “I posted on Facebook saying I was going to sell steaks, sweet potato pudding and coconut drops out of my home. The crowds showed up in droves and I made $1,600 — half the price of my daughter’s trip — on a weekend.”

While her daughter’s trip was ultimately canceled, the experience gave Nisbeth the confidence to finally quit her food and beverage job and follow her dream of opening her own restaurant. When Reggae Pot debuted in Colorado Springs, she had less than $24 to her name after paying all the initial expenses. But soon she landed her first big gig, catering for the 2016 Air Force Graduation, where former President Barack Obama was the keynote speaker. 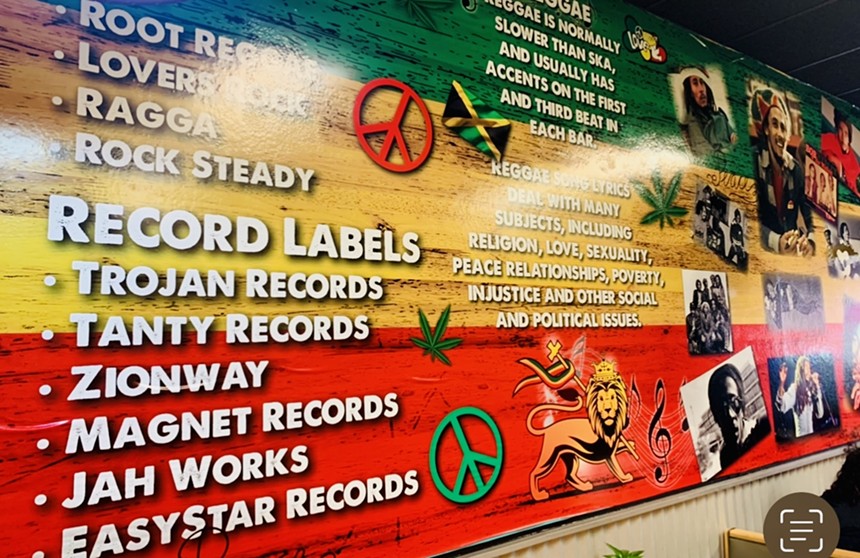 It was smack dab in the middle of the pandemic when Nisbeth finally decided to trade the food truck parking lot for a permanent home—Reggae Pot was getting too popular and she needed roots. In the middle of the move, however, fate took a tragic turn when her twenty-year-old son died suddenly and unexpectedly in April 2021.

Nisbeth’s former Colorado Springs clients and new Centennial neighbors rallied around her; hundreds of memorial cards and donations poured into the restaurant and flowers were laid on the dais. “We were so supported by our friends and family and people we didn’t even know. It helped,” she says.

Through her grief, Nisbeth decided to channel that hurt into her happy place, the restaurant she and her partner opened last May. The charming decor transports you to the Caribbean, with prominent pops of green, yellow and black. A huge timeline on the wall highlights the rise of reggae music, with nods to famous Jamaican singers.

“You can actually taste the culture in Reggae Pot’s food,” says Mel Zavaglia, a regular at the restaurant. Everything is thoughtfully made. It sounds so cliche, but this really is the best Jamaican food I’ve ever tasted.”

Nisbeth’s two top sellers are the golden patties ($3.50+), which come in several varieties and are also available frozen, and the oxtail ($24). “Would you believe oxtail costs the same as a really expensive steak?” Nisbeth notes the cut, which can be difficult to find. At Reggae Pot, it is slow-fried in brown sauce with potatoes, carrots, butter beans and spices. “It’s so popular that it’s hard to keep up with demand,” adds Nisbeth.

Other standouts on the menu are the goat curry ($20) and Jamaica’s national dish, ackee (a tropical fruit) and saltfish ($18). Reggae Pot also offers fresh-squeezed juices and Jamaican sodas, including Ting, the country’s top seller.

“We are really looking forward to the holidays,” adds Nisbeth. “We’ll be serving jerk turkeys for Thanksgiving, special holiday cocktails and dinner packages. And we’ll be blasting a lot of Chronixx, my new favorite band. They sound like Bob Marley, I wonder.”

Reggae Pot is located at 7562 South University in Centennial and is open 11am to 8pm Tuesday through Saturday and noon to 6pm on Sundays. For more information, visit reggaepotjamaicangrill.com.