Jurgen Klopp had words to say about the referee at Aston Villa, the injury to Fabinho and the mentality of his team after a comeback 2-1 victory on Tuesday night.

Here are three key points from the manager after the victory at Villa Park:

The clear, sour note from the night was the injury to Fabinho, and while the Brazilian is said to be in a positive mindset, a scan will reveal everything.

“He felt a muscle, not too much. It was not the thigh, but the other side [hamstring]. He’s pretty positive, but I’m not sure what I can take from it, to be honest. We’ll see, “said Klopp.

“I can not say when he is ready. No one has an answer to that. He has a good feeling and it gives me a better feeling than I had when I took him off.

“If you ask me now, I would say leave Fabinho out [for this game] but I can not return it. He was absolutely fine before the match. “ 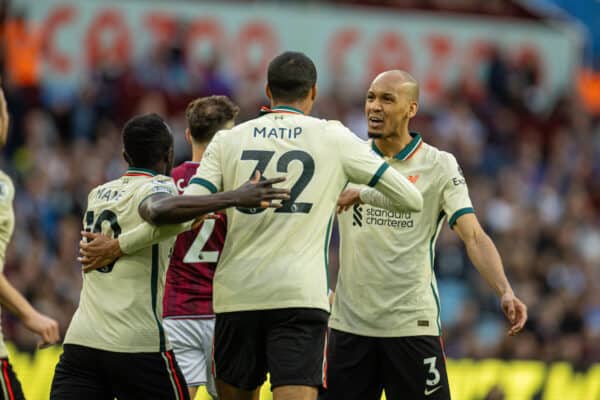 It was a physical competition at Villa Park and the good news was that there were no more issues to report, even though Naby Keita provided a scare or two for fans late.

“The rest came through without too many problems,” Klopp said.

And we do not have to worry about Andy Robertson after he was left out of the match day squad.

“Robbo was not in the squad because I wanted to give him a rest at home and brought another striker into the squad if we needed it. That’s it. Other than that we should be fine.”

Now to the FA Cup final!

Liverpool remain second in the Premier League table on goal difference, three behind Man City, but Klopp does not have the energy to waste on the results of Pep Guardiola’s team.

Before the Reds are back in the league, City will have played twice, but Klopp’s men have the FA Cup final to think about.

“Now we really have to recover and play the FA Cup final, because there is no mercy. The situation of qualifying for the final is massive.

“Their quality and mentality and character is why we are where we are. I’m not surprised they can do such a thing, but I do not take it for granted.”

Afghanistan: Police faces, bodies and beards on the streets of Kabul