(Bloomberg) — Peloton Interactive Inc . will begin a sweeping overhaul that includes cutting nearly 800 jobs, raising prices on its Bike+ and Tread machines, and outsourcing functions such as equipment supplies and customer service to outside companies.

The changes, which the company revealed Friday in a memo to employees, also include gradually closing many of its retail showrooms — a process that will begin next year. It’s the most sweeping shake-up yet under CEO Barry McCarthy, a tech veteran who took the helm in February.

Peloton is hoping to turn around a company that thrived in the early days of the pandemic but suffered a punishing slowdown in the past year. Revenue is falling, losses are mounting and the company’s share price has fallen almost 90% over the past 12 months. The latest moves are an attempt to reinvigorate sales, increase efficiency and restore some of Peloton’s former cachet.

“We need to get our revenue to stop shrinking and start growing again,” McCarthy said in the note to Bloomberg, adding that the changes are essential to making Peloton’s cash flow positive again. “Cash is oxygen. Oxygen is life.”

Read the Peloton CEO’s full memo here. Investors applauded the moves, sending shares up 14% to $13.53 in New York trading. It was the biggest one-day gain in more than three weeks.

In its third known set of layoffs this year, the company will lay off 784 employees across its distribution and customer service teams. Peloton will stop using in-house employees and vans to deliver equipment and close 16 warehouses across North America. Instead, it will rely on third-party logistics providers, or 3PLs, to set up bikes and treadmills at customers’ homes.

Peloton already uses third-party freight companies JB Hunt Transport Services Inc. and XPO Logistics Inc. for some supplies and will leave its remaining internal distribution to these firms. The company acknowledged that such a change might not be loved by all buyers, as some have complained that third-party delivery services aren’t on par with Peloton’s own efforts.

“This has been a challenge,” McCarthy told staff. “We’re not going to solve it overnight, but we have no choice but to make it work, so we’re leaning into it and proactively managing our 3PL relationship. We’re confident in the plan we have laid and we are encouraged by the progress we are making.”

Peloton is also cutting about half of its customer support team, which is mainly located in Tempe, Arizona and Plano, Texas. The Company will use third-party firms to handle support requests as needed to augment the staff it retains. “These expanded partnerships mean we can ensure we have the ability to scale up and down when volume fluctuates, while still continuing to deliver the level of service our members have come to expect,” McCarthy wrote.

The liquidation of internal deliveries, distribution and warehouses will eliminate 532 jobs, while a further 252 will be removed from support teams. Peloton said last month it would cut about 570 employees in Taiwan as part of a move away from in-house equipment manufacturing. In February, it laid off nearly 3,000 employees across the company.

Still, McCarthy said the company will continue to hire in key areas, including its software engineering group. “I’m sharing this so you don’t think we’re driving with our foot on the gas and the brake at the same time,” he said.

Acknowledging the reversal, McCarthy said the April price cuts were necessary to move units more quickly and generate cash flow. “I probably wouldn’t have messed with the prices at all if I had been faced with different inventory conditions when we lowered the prices,” he said in an interview.

At the time, Peloton was in the early days of an $800 million restructuring plan and was still in the process of securing a $750 million bank loan.

The price cuts “at least cheapened the perception of the brand,” he said. “So this is a return to historical positioning.”

Peloton is betting that the price increases will help juice sales. During its fiscal third quarter, the New York-based company missed analyst estimates — with revenue falling 24% and losses coming in far wider than expected.

Peloton also said it intends to undergo a “significant and aggressive reduction” of its retail footprint in North America beginning in 2023. The company currently operates 86 stores in the United States and Canada. McCarthy said in the interview that the number of closed locations will be determined by negotiations with landlords. He said the savings from store closings will be redistributed to marketing and selling its products in other ways.

“We need to be where our customers are when they make purchasing decisions,” McCarthy said in the interview. “They’re increasingly doing it online,” he said, and that’s reflected in foot traffic.

The pandemic had been a boon to Peloton’s business, with lockdowns sending consumers scrambling to buy their bikes and sign up for online fitness classes. But the company overestimated demand, produced too much equipment and mistakenly believed that the increase in demand would continue after economies reopened. After Peloton began to struggle, the board replaced co-founder John Foley with McCarthy — though Foley remains chairman.

Before the latest moves, Peloton was already moving away from its own unit production and moving the production of its bikes to partners in Asia. The company also implemented a leasing program that could lower the cost of ownership of equipment and raised the price of its content subscription service by $5 to $44 a month.

Peloton is making other changes, including a return to in-person work. Office workers will have to come at least three days a week starting Sept. 6, McCarthy said Friday. That’s in line with the approach taken by other technology companies, such as Apple Inc., but marks a turnaround for a company that benefited from the home-based lifestyle.

So far, Wall Street has been skeptical of Peloton’s comeback. Shares continued to slide after McCarthy took the job and remain down about two-thirds through 2022. Management is betting that improving Peloton’s fixed costs and raised prices will boost investor sentiment.

“I continue to be optimistic about Peloton’s future,” McCarthy said in the note. “That doesn’t mean there won’t be challenges ahead. There will be, and there will be unforeseen setbacks. That’s the nature of turnarounds. But I’m confident we can overcome the challenges because we’ve come this far in just the last four months, which fuels my optimism about our ability to develop our long-term success.” 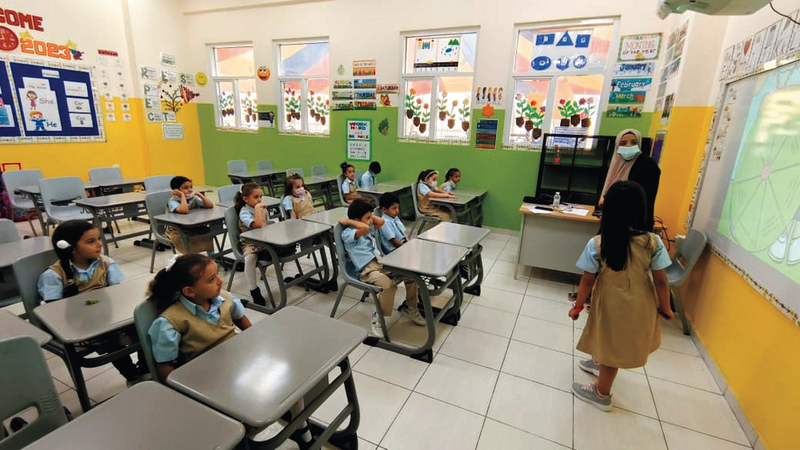 A new monitoring system for private schools in Sharjah