Temptation is inescapable. Gail’s, London’s bougiest bakery chain (and Bat Signal for the yoga pants-clad) seems to have new locations opening every few metres or so. Independent hawkers are in on the fun too: there’s even a new family-owned bakery in town, Buns from Home, that’s dedicated almost entirely to buns — chocolate, coconut, pistachio et al.

To use a phrase from the highbrow British television series Love Island, my type on paper is typically Scandinavian, in particular the gorgeous Swedes: pillowy and soft, tidy, knotted flirtatiously. I am always DTF: down to fika.

But of all the buns that catch my eye, my drug of choice is, without a doubt, a sumptuous, sweet and sticky cinnamon bun.

Aside from liars, who doesn’t love a cinnamon bun? It is the perfect treat. The siren that can lure me into eating with my filthy hands in the depths of a pandemic, tickling the olfactory bulb and hitting almost every taste bud with gusto. Can your croissant do that? Of course not.

Cinnamon buns might seem basic but they are fascinating, complex and multi-faceted, straddling the worlds of both bread and pastry with varieties aplenty. Even toppings can take different forms, from delicate sprinklings of caster sugar to cream-cheese frosting. Quite often, a cinnamon bun’s primary spice is not even cinnamon. What other baked good offers such mystery and intrigue? None!

I rest my case. As for where to chase the doughy dragon, these are my favourite dealers.

As a bun aficionado who spent most of the pandemic wandering west London with a recalcitrant dachshund and finding new ways to make my jeans too small, the opening of Buns from Home was a revelation. It initially began as a home-baking project: 31-year-old Barney Goff had been working part-time as a baker and left his full-time job in fashion to formally retrain when the first lockdown was imposed. He started making pastries from his mother’s kitchen to sell to neighbours. Orders came in thick and fast; soon his younger brother Gabriel was enlisted to help. Following a successful crowdfunding campaign, the two brothers, along with their mum Michelle, opened a shop just off Portobello Road in September 2020. (They recently expanded with new outposts in Holland Park and Covent Garden.)

Everything you need to know about Buns from Home can be summarised by that smiley-face emoji that has closed eyes and drool pouring out of its mouth. Buns from Home’s offering is so, so good. Flavours are wide-ranging: cinnamon, cardamom and chocolate-hazelnut are always on the menu, while specials such as cheesecake, pistachio and tiramisu make appearances too. The cinnamon buns are exquisite, and, like all of the buns here, are made with a layered, croissant-style dough, hand-rolled and laminated using top-quality French butter. And does it ever make a difference: these buns are a serious exercise in indulgence.

Fabrique, a Swedish bakery chain with five locations across London, churns out what can be considered the Kardashians of the bun world. Their kardemummabullar and kanelbullar are not only alliterative but uniform in appearance, intricately dressed and begging to be photographed.

There is substance with all this style. Fabrique’s buns taste as good as they look. The fluffy dough is made the Swedish way by adding a good amount of peppery cardamom to the flour. The sticky filling, a meeting of the holy trinity (sugar, butter and cinnamon), is spread over the dough, which is then folded like flat-pack furniture, cut into strips and tied, resulting in a plump work of art.

Fabrique’s cardamom buns are equally gorgeous, while their semla (cream-filled) and other seasonal buns (walnut, most recently) are also worthy of air time. According to this experienced customer, the best time to go fika yourself is around opening time when the goods are warm from the oven.

Whoever said size doesn’t matter has clearly never been to Fortitude Bakehouse, a little operation tucked behind Russell Square that bakes big, beautiful buns. These scaled-up cinnamon rolls are large enough to share, though they typically elicit greed rather than generosity.

What also sets Fortitude’s hand-rolled cinnamon buns apart is their complexity. The dough is fermented for 48 hours, which results in a deeper flavour and almost boozy tingle on the tongue. The sticky filling is extra treacly too, which comes from the addition of molasses sugar instead of the more commonly used lighter varieties.

Buns aside, Fortitude Bakehouse is one of the rare bakeries in the UK that makes sourdough cakes, which are fluffier and more tender than your average. (Adding sourdough starter to cake batter inhibits gluten development, and gluten is what can often make cake a bit chewy.) And there’s so much more to love at Fortitude, from its wide assortment of sweet buns to savoury pastries, sandwiches, salads, bread and more. Their sausage rolls are life-giving.

Violet, a bakery-café in the hip east London neighbourhood of Dalston, is best known for its royally approved cakes. American owner/baker Claire Ptak, who worked as pastry chef for Alice Waters at Chez Panisse, shot to fame in 2018 when she was commissioned by Prince Harry and Meghan Markle to make a grand tiered lemon elderflower cake for their wedding. But Violet’s offering impresses beyond celebratory sponge, from tasty sandwiches, toasties and quiche to all sorts of pastries — and, of course, its very popular cinnamon buns.

Ptak developed the recipe when she opened her bakery 12 years ago, based on her findings in a 1950s cookbook and inspired by the flavours and textures she encountered travelling in Scandinavia. Unlike most cinnamon buns, Violet’s are made without yeast, so the dough is more scone-like and flaky. (This also makes them easier to replicate at home, for those of you who too have a murderous hand with sourdough starter.) Embedded within the dough is that secret Scandi ingredient: crushed cardamom. Brown sugar and cinnamon punctuate every layer too, and an extra hit of sweetness comes from a light dusting of sugar over the top.

There is a ferocious rage that takes hold when walking through a busy part of London surrounded by throngs of tourists — the slowest walkers on Planet Earth. Time is short, blood sugar is usually low and it inevitably starts raining. Jekyll becomes Hyde, Banner becomes the Hulk, et cetera. But tucked away on Rose Street, a quiet alley a wink away from the hellscape that is Leicester Square, exists the antidote to any anger: Bageriet, a heavenly little Swedish bakery.

Bageriet offers a range of Swedish goods, from biscuits, buns and cakes to dense, treacly loaves of rye bread. But the cinnamon rolls will truly cure what ails you. Crispy, light and fluffy — one often doesn’t feel like enough. Luckily, Bageriet does kanellängd (cinnamon bread), for those looking for larger portions to cut and share. (The Danish bakery chain Ole & Steen, with branches across London, also offers a similar cinnamon sharer, as well as a handful of other delicious cinnamon-infused treats.)

Bageriet’s dough is slightly sweet, yeasted and injected with a hint of cardamom, rolled together with a cinnamon filling and delicately topped with pearl sugar. (NB: There isn’t much seating at Bageriet, aside from a couple of small bistro tables outside, but you’ll probably have inhaled your bun before even contemplating sitting down.)

After I’d lived for eight years on this side of the Atlantic, Luminary Bakery’s cinnamon swirls were a special discovery. They are the closest in style and substance to what we enjoy in North America: very sticky, sweet and indulgent — and topped with cream-cheese frosting. Where Luminary’s swirls differ is that this is done with moderation and a delicate touch. These are very much a treat, but not one that requires licking globs of icing off your fingers while butter oozes down your arm.

Each pillowy swirl is made by hand by Luminary’s bakers, whose genius includes spreading a thin layer of filling on to a baking tray before arranging the cinnamon buns on top, so the bottoms come out caramelised. Cinnamon rolls are baked and available at each shop every day, with bespoke orders happily sorted too: a customer last year even had a wedding cake created out of tiers of cinnamon buns — an inspiration to us all.

Luminary is also a social enterprise: the income generated from the cinnamon swirls and other baked goods helps to support disadvantaged women in the UK. Founded in 2013 by Alice Williams, it uses baking as a tool to gain employment through an apprenticeship programme and paid work.

I was first introduced to Hej coffee by Rupert Murdoch, which is not entirely untrue. But, if you ever are invited for a coffee at the News UK building in London Bridge, you’ll discover a brew that is exactly what you’d expect from an Antipodean billionaire. That’s because it’s sourced from Hej, the south London roasters who supply beans to many lucky offices in the city. The unlucky can head to one of Hej’s two “café bars”. The visit is made even more worthwhile by their delicious cinnamon rolls.

Soothing smells of coffee — and a counter full of cinnamon rolls — welcome you to Hej Café in Bermondsey (the other is in Elephant and Castle). The cinnamon rolls are the meeting point on a Venn diagram featuring the usual varieties: large, light and fluffy with a good dose of spice and a glaze of sweetness over the top. The friendly baristas are serious about serving good buns, and will warm one up for you too.

Branches across London and the south of England

Recommending Gail’s in London is almost akin to suggesting a little sandwicherie called Pret A Manger. It is the latest London chain-cum-private equity darling (US fund Bain Capital acquired the bakery’s holding company for £200mn last year), so new Gail’s are popping up everywhere, which is good news for carb-loving consumers. You are never far away from the instant high offered by one of its sugary cinnamon buns — 6,000 of which are baked across Gail’s locations per day, according to head baker Roy Levy. 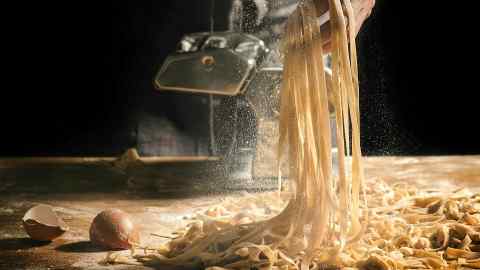 Gail’s cinnamon buns are the result of nearly 15 years of finessing the recipe, says Levy, with inspiration drawn from the classic California morning bun (laminated dough, cinnamon, sugar and orange zest). Gail’s buns are made with croissant dough too, and are swirled with cinnamon, butter and brown sugar. The crispy, flaky exterior (delicately covered in cinnamon sugar) hides a soft interior. The buns are baked at a high temperature, which caramelises the sugar and butter at the bottom of the pan and creates an almost toffee-like texture and taste. Gail’s offers seasonal buns too, such as the glorious sticky date and coconut babka.

Who makes London’s best buns in your opinion? Tell us in the comments

Cities with the FT

FT Globetrotter, our insider guides to some of the world’s greatest cities, offers expert advice on eating and drinking, exercise, art and culture — and much more