The Premier League champions welcomed Copenhagen to the Etihad in their third Champions League group game.

And it took Haaland just seven minutes to get his goals to 18 in all competitions.

The 22-year-old drove home on his weaker right foot.

He then struck again just after the half-hour mark, finishing instinctively into an empty net.

It was Haaland’s 19th goal in just 13 games played, and it was the fifth time this term that he has scored two or more goals for City. 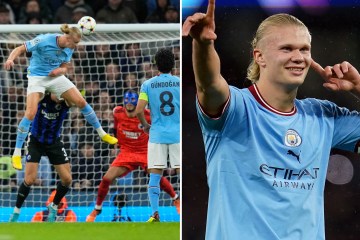 His terrifying form led Copenhagen goalkeeper Kamil Grabara to question whether he was human.

City ace Grealish revealed to BT Sport: “It’s honestly unbelievable. I’ve never witnessed anything like it in my life.

“For the first and second goals I was just laughing. He’s always there.

“The card man said something to me when I went back. He said ‘he’s not human!’

“I said ‘are you telling me?’ Hopefully he can continue this form and bring us glory.”

Haaland was withdrawn before the start of the second half, denying him 45 minutes to chase his fourth hat-trick of the season.

City went on to add three more to Haaland’s first half.

Davit Khocholava scored an own goal for the visitors and Riyad Mahrez, as well as Julian Alvarez, were on target to secure a 5-0 victory.