LIGHTSUM continues to raise expectations for their first mini-album release, Into the Light. The members first caught the attention of fans by delivering a cooler look to themselves in their comeback concept images. Now the group is expanding their sleek, yet refreshing, image in the latest music video teaser to their title track, “ALIVE”. 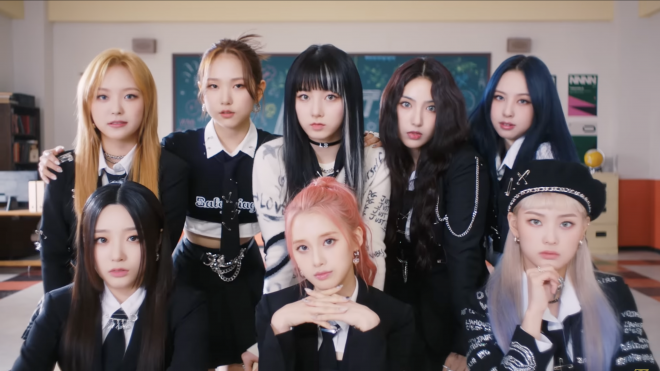 On May 22, the member agency CUBE Entertainment unveiled the teaser across LIGHTSUM’s official YouTube and SNS accounts.

The video immediately captured the viewers and depicted the different charms of each individual LIGHTSUM member.

More specifically, the teaser showed a bolder look for each member, each wearing a unique uniform-inspired outfit. The cooler image is a refreshing twist for the girl group, which has consistently charmed the hearts of K-Pop fans through cute concepts and releases so far.

As such, curiosity regarding the sound of their upcoming albums continues to increase day by day.

Their intense title track, “ALIVE”, conveys the image of an achromatic world that is becoming colorful. LIGHTSUM will deliver the number in their characteristic lovely performance charisma. In addition, the mini-album as a whole contains five songs, which demonstrates the group’s versatility.

LIGHTSUM debuted for the first time last year with their debut single, “Vanilla”. With it, the eight members received enormous attention both at home and globally. Subsequently, the members made their comeback with their second single “Light A Wish”, which highlighted their growth since the debut.

Many are eagerly awaiting their new sound and continued performance with their next release.

Their first mini-album, Into the light, will continue to deliver their developed and exalted I to fans all over the world. Meanwhile, LIGHTSUM will make their comeback on May 24 at. 18.00 KST.