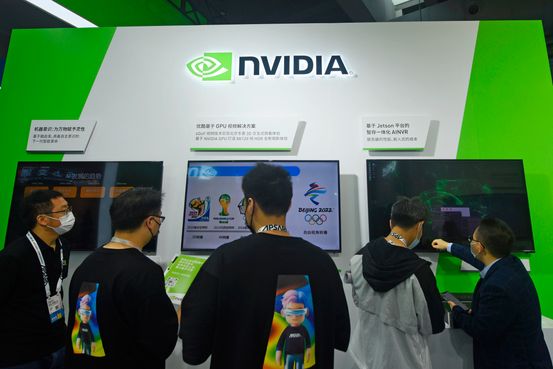 advanced processors to China throws a wrench in Beijing’s ambitions to lead the way in artificial intelligence, as Chinese officials accused the United States of monopolizing advanced technologies.

The curbs cut off China’s biggest tech companies from some of the world’s most advanced chips. Nvidia’s affected customers include Alibaba Group Holding Ltd.

, the gaming and social media giant. Both sell cloud services powered by Nvidia chips capable of crunching massive amounts of data for advanced applications from autonomous factories to video processing.

“This is a big step from the United States because it targets high-performance processors that are mainly used for commercial applications,” said Handel Jones, managing director of consultancy International Business Strategies Inc.

Nvidia, the world’s largest chip maker by market capitalization, said on Wednesday that new US rules preventing unlicensed sales of its high-end chips to Chinese customers will cost it $400 million in sales. It said it may have to move some of its operations out of China.

which said it was also affected by the licensing requirement but did not expect a significant impact, fell more than 6%.

The US Commerce Department, which handles export restrictions, has declined to comment on changes to its policy, but said the move was aimed at preventing China from acquiring US technology to advance its military.

China’s Ministry of Commerce said on Thursday that the US move would harm the interests of both Chinese and US companies. The United States should treat companies in all countries fairly, it said.

The restrictions cover sales to China, Hong Kong and Russia of Nvidia’s A100 graphics processing unit, a chip unveiled two years ago and used in data centers to perform demanding artificial intelligence calculations. Also affected are the company’s upcoming H100 series of graphics chips, the company’s most advanced, the company said, as well as future products that may be more powerful. Nvidia says it is no longer selling products to customers in Russia following the country’s invasion of Ukraine.

Users of the A100 include Alibaba, Tencent and Baidu Inc.,

Nvidia has said. The companies operate the country’s dominant cloud computing services, which provide on-demand computing and storage and can also be used by companies to program AI applications.

A spokeswoman for Tencent declined to comment. Alibaba and Baidu did not immediately respond to a request for comment.

On Thursday, Nvidia said it received permission from the US government to carry out exports to support US customers of the A100 through March 1. It also said it received necessary approvals to continue development work on the H100 chip. Previously, the company said the new restrictions could hamper its support for existing A100 customers and hamper the H100’s development.

Beijing has identified AI as a top strategic technology and has thrown government support behind companies and laboratories in the sector. A weakness for China’s AI ambitions, however, is its reliance on American companies such as Nvidia for advanced chips essential to programming complex AI algorithms.

More than a quarter of Nvidia’s $26.9 billion in 2022 revenue came from China and Hong Kong. Jensen Huang, president and co-founder of Nvidia, said in a call with analysts last month that China is a “very important market for us, a very big market for us.”

In the long term, the impact of losing Chinese AI chip customers amounted to about 10% of revenue, analysts at Truist Securities said in a note, adding that the company was unlikely to recover those losses. In the short term, Chinese customers may move to older-generation Nvidia chips that are not subject to licenses, it said, but the United States was unlikely to grant the licenses it needs to keep the company going in the future.

Nvidia has had a close relationship with the Chinese market in recent years. The company provided the cutting-edge chips that helped some of China’s surveillance companies train their image recognition algorithms. Recently, Nvidia executives said that the company’s technology has also become critical for automakers such as BYD co.

to boost their electric car and self-driving vehicle ambitions.

Nvidia has said that Inspur uses the A100 for image processing, financial analysis and other applications. In March, Inspur said its AI servers would support Nvidia’s H100 processor, adding that the company “has a long-term partnership with Nvidia.”

Lenovo and Inspur did not immediately respond to requests for comment Thursday.

Nvidia said in 2020 that many of China’s largest cloud service providers had adopted the A100 to power a variety of AI applications.

Mr. Jones said losing access to the A100 and H100 would have a significant impact on Chinese companies working on certain artificial intelligence technologies, forcing Nvidia’s Chinese customers to use older technology.

For Alibaba, the A100 was useful for applications such as training AI algorithms and for high-performance computing, Nvidia said. A page on Alibaba Cloud’s website describes several uses for the A100, saying it can accelerate analytics in sectors such as healthcare, finance and manufacturing.

Tencent, which runs China’s third-largest cloud company, has used the A100 for data analysis, video analysis and other areas, according to Nvidia. Tencent said in April that it would become one of the first cloud providers in the industry to launch services using a version of the A100.

An alternative for Chinese users of the affected Nvidia chips would be to use more lower-end Nvidia processors, which are not subject to the new restrictions, said Edison Lee, a Hong Kong-based analyst at investment bank Jefferies. Chinese manufacturers of GPUs include Loongson Zhongke Technology Co. and Hygon Information Technology co.

but switching to domestic providers would present hurdles, he said.

“There are no direct local substitutes,” he said in a research note Thursday.

— Qianwei Zhang contributed to this article.

Write to Lisa Lynn at Lisa.Lin@wsj.com and Dan Strumpf at daniel.strumpf@wsj.com