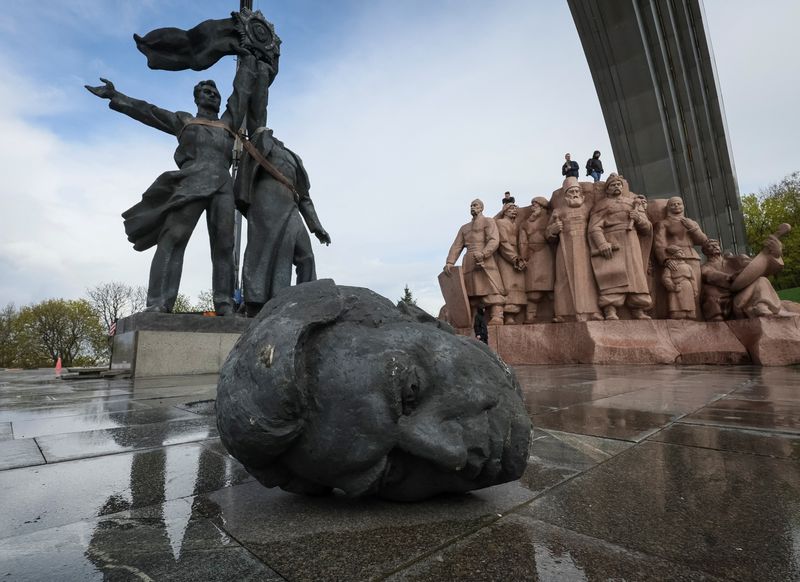 © Reuters. A Soviet monument to a friendship between Ukrainian and Russian nations is seen during its demolition, in the midst of Russia’s invasion of Ukraine, in central Kiev, Ukraine April 26, 2022. REUTERS / Gleb Garanich

KYIV (Reuters) – Ukrainian authorities on Tuesday dismantled a huge Soviet-era monument in the center of Kiev to symbolize friendship between Russia and Ukraine, a response to Moscow’s invasion, according to the city’s mayor.

The eight-meter-long bronze statue depicted a Ukrainian and Russian worker on a pedestal holding together a Soviet order of friendship. The statue was located under a giant titanium ‘People’s Friendship Arch’, erected in 1982 to celebrate the 60th anniversary of the Soviet Union.

“We now see what this ‘friendship’ is – the destruction of Ukrainian cities … killing tens of thousands of peaceful people. I am convinced that such a monument has a completely different meaning now,” said Kiev Mayor Vitaly Klitschko.

Craftsmen started by removing one of the two bronze heads, which fell to the ground with a hollow jingle.

As a crane lifted the monument from its moorings and gradually lowered it to the ground, a crowd of about 100 people cheered and shouted “Glory to Ukraine” and other slogans.

“Russia invaded Ukraine … Can we be friends with Russia? What do you think? This is our worst enemy, that’s why the monument to Russian-Ukrainian friendship no longer makes sense,” said Serhiy Myrhorodsky, one of the designers.

Russia’s invasion of Ukraine, launched on February 24, has left thousands dead or wounded, reduced cities to ruins and forced more than 5 million people to flee abroad.

Moscow calls its actions a “special operation” to disarm Ukraine and protect it from fascists.

“We should have no relations with the nation of aggressors … no friendship, no relations, nothing,” said Diana, a young woman who did not give her full name.

Klitschko said the arch would remain in place but be renamed the Arch of Freedom of the Ukrainian People.