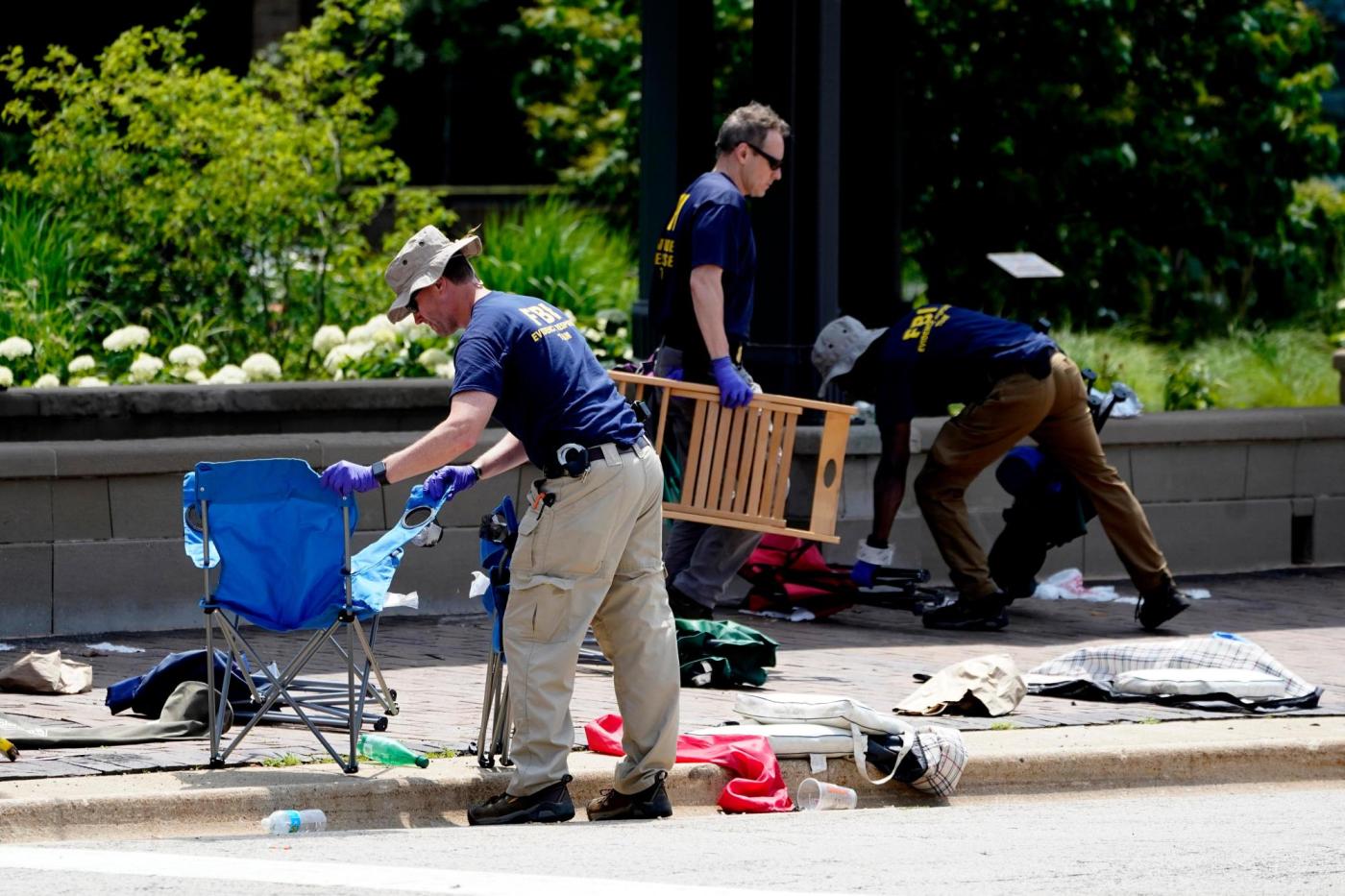 HIGHLAND PARK, Ill. (AP) – A man charged Tuesday with seven counts of murder after firing more than 70 shots at an Independence Day parade in suburban Chicago legally bought five weapons, including the high-powered rifle used in the shooting, despite authorities was called to his home twice in 2019 for threats of violence and suicide, police said.

Lake County State Attorney Eric Rinehart said the suspect, if convicted of the first-degree murder charges, will receive a mandatory life sentence without the possibility of parole. He promised that dozens more charges would be sought.

A spokesman for the Lake County Major Crime Task Force said the suspected shooter, who was arrested late Monday, used a rifle “similar to an AR-15” to spray more than 70 cartridges from the top of a commercial building into a crowd gathered for the parade in Highland Park, a wealthy community of about 30,000 inhabitants on the shores of Lake Michigan.

A seventh victim died of their injuries Tuesday. More than three dozen other people were injured in the attack, which Covelli said the suspect had been planning for several weeks.

The assault happened less than three years after police went to the suspect’s home after a call from a family member who said he threatened to “kill everyone” there. Task Force spokesman Christopher Covelli said police confiscated 16 knives, a dagger and a sword, but said there was no evidence he had any weapons at the time, in September 2019.

Police in April 2019 also responded to a reported suicide attempt by the suspect, Covelli said.

The suspect legally purchased the rifle used in the Illinois attack within the past year, Covelli said. In all, police said, he bought five firearms, which were found by officers at his father’s home.

The revelation about his arms purchases is just the latest example of young men who were able to procure weapons and carry out massacres in recent months despite sharp warning signs about their mental health and propensity for violence.

Illinois State Police, which issues licenses to gun owners, said the gunman applied for a license in December 2019, when he was 19. His father sponsored his application.

At the time, “there were insufficient grounds to establish a clear and present danger” and reject the application, state police said in a statement.

Investigators who have questioned the suspect and reviewed his post on social media have not established a motive or found any indication that he targeted victims by race, religion or other protected status, Covelli said.

Earlier in the day, FBI agents looked into trash cans and under picnic blankets while searching for more evidence at the scene. The shots were initially mistaken for fireworks before hundreds of partygoers fled in horror.

A day later, prams, lawn chairs and other items left behind by panicked parade guests remained within a wide police circle. Outside the police band, some residents drove up to collect blankets and chairs they left behind.

“People did not immediately know where the shot came from, whether the gunman was in front of or behind you and was chasing you,” he said Tuesday as he picked up a stroller and lawn chairs.

Armed man initially escaped capture by dressing as a woman and meddling in the fleeing crowd, Covelli said.

The shooting was just the latest to crush the rituals of American life. Schools, churches, grocery stores and now community parades have all become killing grounds in recent months. This time came the bloodshed as the nation tried to celebrate its founding and the ties that still hold it together.

His father, Bob, a longtime delicacy owner, ran for mayor in 2019. The candidate who won that race, current Highland Park Mayor Nancy Rotering, said she knew Crimo as a boy in the Cub Scouts.

“And it’s one of those things where you step back and say, ‘What happened?’ Rotation told NBC’s “Today” show. “How did someone get so angry, so hateful, and then take it out on innocent people who literally just had a family day out?”

Crimo’s attorney, Thomas A. Durkin, a prominent Chicago-based attorney, said he intends to file an innocent statement for all charges.

Asked about his client’s emotional state, Durkin said he has only spoken to Crimo once – for 10 minutes on the phone. He declined to comment further.

Steve Greenberg, the parents’ lawyer, told The Associated Press on Tuesday night that the parents are not worried about being charged with anything related to their son’s case.

“There is no chance that they will be charged with anything criminal,” he said. “They did nothing wrong. They are just as shocked and shocked as anyone else.”

The shooting took place at a spot on the parade route where many residents had designated the best vantage points early in the day.

Among them were Nicolas Toledo, who visited his family in Illinois from Mexico, and Jacki Sundheim, a lifelong congregation and staff member of the nearby North Shore Congregation Israel. The Lake County District Attorney released the names of four other victims.

Since the beginning of the year, the United States has seen 15 shootings in which four or more people were killed, including that in Highland Park, according to the Associated Press / USA TODAY / Northeastern University mass murder database.

Dozens of minor shootings in nearby Chicago also left eight people dead and 60 others injured over the weekend of July 4th.

In 2013, Highland Park officials approved a ban on large-capacity semi-automatic weapons and ammunition magazines. A local doctor and the Illinois State Rifle Association quickly challenged the liberal suburban stance. The legal battle ended at the doorstep of the U.S. Supreme Court in 2015, when judges refused to hear the case and left suburban restrictions in place.

Under Illinois law, arms purchases can be denied to people convicted of crimes, drug addicts, or those designated as “mental defects” and capable of harming themselves or others. It could have prevented a suicidal criminal from getting a weapon.

But by law, whoever is a “mental defect” must be determined by “a court, board, commission or other legal authority.”

The state has a so-called red flag law designed to stop dangerous people before they kill, but it requires family members, relatives, roommates or police to ask a judge to order weapons seized.

Crimo, who goes by the name Bobby, was an aspiring rapper with the artist name Awake the Rapper, and posted on social media dozens of videos and songs, some ominous and violent.

In an animated video since it was taken down by YouTube, Crimo raps about armies “walking in the dark” when a drawing of a man pointing a rifle, a body on the ground and another figure with their hands up is shown in the distance.

Federal agents reviewed Crimo’s online profiles, and a preliminary investigation into his Internet history indicated he had researched mass murder and had downloaded several images depicting violent acts, including a beheading, a law enforcement official said.

The official could not discuss the details of the investigation publicly and spoke to The Associated Press on condition of anonymity.

Vice President Kamala Harris, who had been in Chicago to speak at the National Education Association’s annual meeting on Tuesday, visited the site of the shooting to offer condolences to first aiders and local officials.

“The entire nation should understand and have a level of empathy to understand that this can happen anywhere, in any peace-loving community,” Harris said in brief comments to reporters at Highland Park. “And we should stand together and talk about why it should stop.”

Shapiro, the resident of Highland Park who fled the parade with his family, said his 2-year-old son woke up and screamed later that night.

“He’s too young to understand what happened,” Shapiro said. “But he knows something bad has happened.” 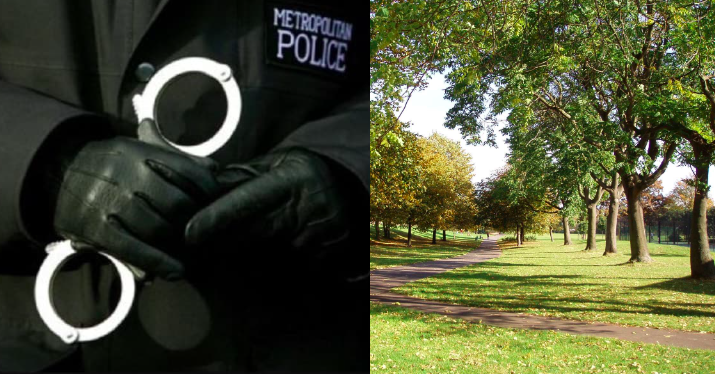