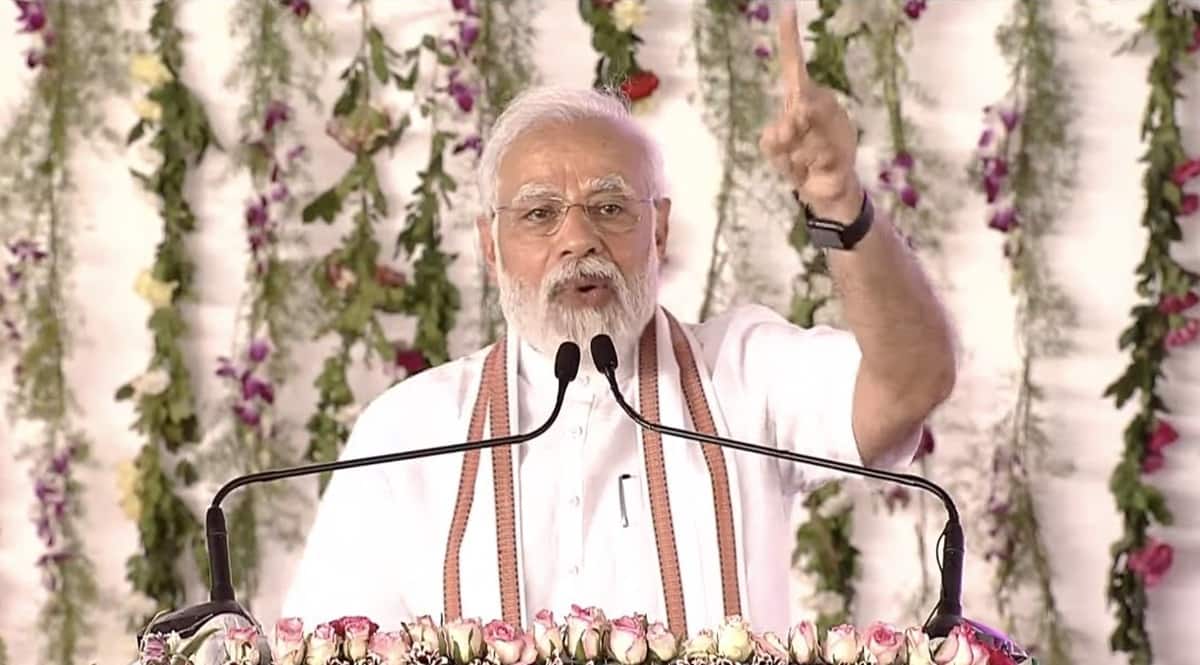 Prime Minister Narendra Modi said on Sunday that Jammu and Kashmir are presenting a new example of “democracy and determination”, as several development initiatives have been launched in the last two to three years.

When he visited Jammu and Kashmir for the first time since the repeal of Article 370 in August 2019, he also said that 38,000 billion. Rs in private investment has come to the territory of the trade union (UT) in the last two years, in addition to witnessing a strong influx of tourists.

Modi spoke in the village of Palli in the Samba district, about 17 km from Jammu, on the occasion of the national Panchayati Raj day. The speech was passed on to all grams of panchayats across the country.

The Prime Minister also inaugurated and laid the foundations for several Rs 20,000 crore development initiatives for Jammu and Kashmir.
Modi said his government has implemented as many as 175 key laws and the Panchayati Raj system for UT people who were “deprived” of these benefits as Jammu and Kashmir had special status under Article 370.

“Jammu and Kashmir present a new example of democracy and determination, as several development initiatives have been launched in the last two to three years,” he said.

Modi also expressed joy that it was the first time that the election for the three-part Panchayati Raj system was conducted peacefully sometime back in Jammu and Kashmir.

In the last two to three years, a lot of development initiatives have been taken in Jammu and Kashmir, and about 175 key laws were implemented here, which gave due rights to the people of UT, he said.

“The Panchayati Raj system is a good system. It was tom-tommed, people felt proud of it, which was not wrong. But the people of Jammu and Kashmir were deprived of the benefits of this system … until our government came to power in Delhi, “said Modi.

The Prime Minister said he was pleased that once democracy has reached the grassroots of Jammu and Kashmir, he spoke with gram panchayats across the country from here.

The National Democratic Alliance (NDA) government has directly provided Rs 22,000 crore funds to panchayats in union territory to “strengthen grassroots democracy” compared to the Rs 5,000 crore previously given under this heading, he said.

The central government’s policies and schemes are being “implemented quickly” and this is to the benefit of UT’s villages, Modi said, listing schemes such as those that provided cooking gas connection, electricity, water and toilets.

“The private investment in Jammu and Kashmir for the last seven decades has been around Rs 17,000 crore, but in the last two years it is Rs 38,000 crore … private companies and investors are coming here now,” he said.

The Prime Minister said that Jammu and Kashmir will write a new chapter on success for the next 25 years, which is the ‘Amrit Kaal’ period of Indian independence. The young people in the region will get employment at the rapid pace of development, he said.

Modi assured the youth of Jammu and Kashmir that his government will make sure that they do not face problems related to basic facilities that their parents or grandparents encountered.

He said the residents of Jammu and Kashmir, who did not get the benefits of booking before Article 370 was operational, are now getting it.
“We are trying to keep all areas of Jammu and Kashmir connected for 12 months of the year … we are also ensuring the same for border villages under the ‘pulsating village scheme’ announced in the latest EU budget,” he said. .

Border states and UTs like Jammu and Kashmir and Punjab will benefit from this development plan for border villages, Modi said.
He also urged farmers to move towards natural agriculture as the current system of using chemical fertilizers destroys and pollutes the soil and the underground water.

Modi asked citizens to sort dry and wet waste and sought cooperation with all to achieve a “carbon neutral” ecosystem.
The Prime Minister also spoke about the importance of using solar pumps in agriculture and also discussed the use of LED bulbs and solar cookers while interacting with panchayat representatives from Jammu and Kashmir.