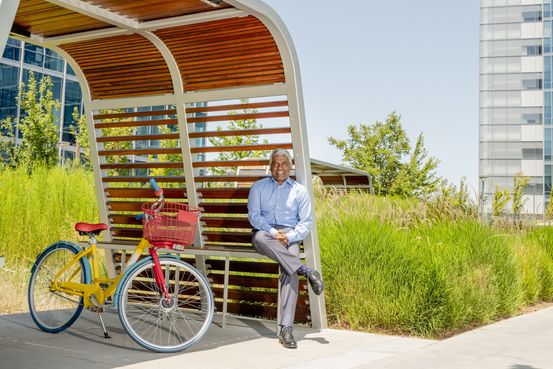 The CIO Journal marks its 10th anniversary by asking business leaders to share their views on the changing role of business and technology.

Google Cloud says the role of information manager has changed significantly as technology has become more important to business. CEOs are increasingly seeing technology as a differentiator and looking to the CIO for expertise, he said.

Kurian has been the CEO of Google Cloud since 2019. Google has acquired shares in companies including Univision Communications Inc. and CME Group Inc.

and received commitments for its cloud service from these companies worth as much as $ 1 billion or more, The Wall Street Journal reported. At the end of 2021, Google claimed 6% of the cloud market, an increase of 1 percentage point over a year earlier, although it lags behind Amazon.com Inc.’s

where he worked for more than two decades.

Here are edited highlights from the conversation with Mr. Kurian. Portions of this interview appeared in a roundtable discussion that the Journal published earlier this month.

WSJ: How has the relationship between business and technology changed over the last 10 years?

Mr. Kurian: If you look at what has really fundamentally changed in technology, I would say that it is the penetration and speed with which new technology has been prevalent. Part of that is the ease with which technology can now be adopted with many things being delivered, from computing as a service … Today, everyone in the organization is a digital worker. Fifteen years ago, before smartphones, people would not have said that.

Nurses have all the digital tools. Airports, every employee has a digital tool. With cloud computing, every business is becoming a technology business. Car companies are increasingly being computerized. Banks, insurance companies, everyone, do what retailers did 15 years ago, and open their front door to a digital medium. Data is becoming a very important asset. Once you make the acquisition of technology significantly more convenient, you will see a rapid increase in the adoption of this technology.

WSJ: How have the roles of CIO and technology leader evolved?

Mr. Kurian: I think we are in a period where CEOs in particular … see technology as a source of differentiation.

If you talk to financial institutions, they really want to serve customers better. They adopt artificial intelligence in several places to streamline operations, and it is under these circumstances that you see a business leader like the head of consumer banking working with the CIO to define what that experience could be. If one looks at the supply chain crisis globally, many organizations are adopting new solutions to understand where the bottlenecks are. Again, it is a joint effort between the technology team or the CIO team and the company.

The Morning Download provides daily insights and news on business technology from the CIO Journal team.

And then it’s a great opportunity for CIOs. Technology adoption is becoming much easier so they can show value faster. The pandemic made it even more clear that technology is crucial to differentiating how an organization [engages with] customers. Therefore, the role of the CIO has changed significantly. CIOs not only manage a portfolio of applications … they also build software development competencies in areas such as cybersecurity, which are becoming a major risk for organizations. CEOs see that being a technology-enabled organization requires that they have some core competencies, and one of them is software development. And then we see that CIOs also need to build the long-term core competency and staffing ability.

WSJ: How has the role of CIO among customers developed?

Mr. Kurian: We see three styles of CIOs. Some of them are core CIOs who have the central IT responsibility. They work a lot with us to adopt technology, in portfolio management, to enable software development skills. In some companies, the CIO is increasingly also the CDO, the chief data officer. And then there’s the third where the CIO also gets the title of chief transformation officer.

WSJ: How will the role of technology in business continue to change?

Mr. Kurian: Each industry over the next five to eight years will completely transform the way it digitizes its relationships with its customers. We have seen a big shift in e-everything: e-commerce, e-banking, e-insurance, e-healthcare. Second, we see that in order to do it really well, you really need to understand your data. So we see a lot of organizations applying new opportunities to understand data on a significantly different scale over the next many years. Third, we see companies using machine learning and artificial intelligence to automate processes and organizations. Artificial intelligence will simply be a capability in software that serves the needs of customers better. And then, finally … the collaboration technology will change. I think in a few years, the idea of ​​you and I having a meeting will not just be looking at each other on a screen. It becomes much more immersive. It is going to connect the physical and digital worlds in a materially different way.

WSJ: What business risks and challenges does the technology pose?

Mr. Kurian: As assets like data become much more central, the pace and speed with which cyber becomes a risk grows. Many devices that have small sensors do not have built-in security technology. So the number of places through which attacks come in is growing. We think it’s important that the industry embraces new tools and processes and designs to protect against these things.