Harry Brook smashed an unbeaten 81 from just 35 balls to help England win the Twenty20 series 2-1 against Pakistan with a comfortable 63-run win in Karachi.

The Yorkshire date featured a dazzling array of shots as England posted an impressive 221-3 from their 20 overs – their joint fifth-highest score in T20 cricket.

He was ably supported by Ben Duckett, who added 70 from 42 deliveries in an unbroken fourth-wicket stand worth 139 from 69 balls, while debutant opener Will Jacks hit 40 from 22 balls to get England off to a good start.

Pakistan struggled early in their reply and were reduced to 28-4 during the powerplay, thanks to blistering opening form from the returning Mark Wood.

The Durham fast bowler, playing his first international since March after two rounds of elbow surgery, took 3-24, including skipper Babar Azam, whose unbeaten 110 inspired Pakistan to a remarkable 10-wicket win in the second T20 on Thursday.

Adil Rashid took 2-32 and Reece Topley finished with 1-22 in his first match of this series as Pakistan could only limp to 158-8 despite a spirited unbeaten half-century from Shan Masood.

The fourth T20 in the series of seven matches will take place on Sunday, again in Karachi. 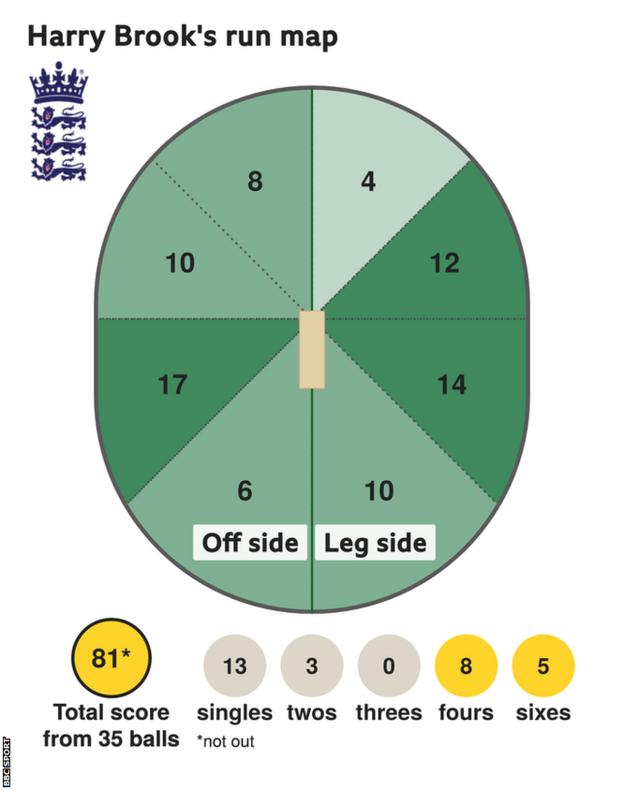 It has been a breakthrough year for Brook, who made his T20 international debut against the West Indies in January before earning his first Test cap against South Africa earlier this month.

And with a T20 World Cup fast approaching, the 23-year-old gave a timely display of his class to press his claim for a place in the starting side.

Coming in after five, his innings featured eight fours and five huge sixes – two of which came off as many balls from Usman Qadir.

The left-hander, right-hander partnership with Duckett seemed to confuse Babar, who struggled to set a field to stop the scoring.

Duckett was a far stronger square of the wicket, relying almost exclusively on the sweep or reverse-sweep to score, but he still picked the gaps in the field with eight fours and a six.

Surrey opener Jacks has been touted as an international cricketer for some time and his steady innings on his England debut ensured the run-rate barely dipped below 10 an over despite the early dismissals of Phil Salt and Dawid Malan.

Wood’s impressive return also gives England cause for optimism as he was clocked at 97mph despite his six-month injury lay-off as the short ball repeatedly caused problems for the Pakistan batsmen.

With the likes of Chris Jordan, Ben Stokes, Liam Livingstone and permanent captain Jos Buttler still back in the side, England suddenly have a flurry of selection problems with the World Cup less than a month away. 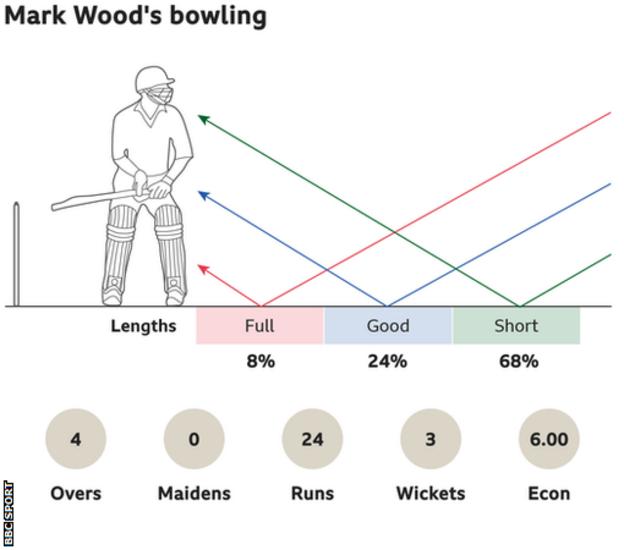 Babar and Mohammad Rizwan were inspired in the second T20 as they led Pakistan to a record 10-wicket win, but they mustered just 16 between them here as a poor powerplay effectively ended the hosts’ chances.

Babar had already survived a leading edge that Malan couldn’t grasp when he was on three, but in the next over he edged a bouncer from Wood straight to Topley on the deep third boundary.

Rizwan then saw his leg stump demolished by a blistering Topley delivery before Haider Ali pulled another wicked short delivery from Wood straight to a diving Adil Rashid at square leg.

The short ball also proved effective for Sam Curran as he coaxed Iftikhar Ahmed into playing a looping shot straight to Topley at mid-on to silence an earlier vociferous home crowd.

Masood provided some resistance with an unbeaten 65 from 40 balls to strengthen his case for a permanent place in Pakistan’s middle order, but only Khushdil Shah and Mohammad Nawaz also reached double figures.

A flurry of late wickets ensured a timid finish to the game compared to the fireworks seen 24 hours earlier.

‘We were reckless’ – reaction

Player of the match, England batsman Harry Brook: “It was very nice to get out there and have a match-winning performance.

“I was just trying to get Ben Duckett to hit the spin – he’s so good at sweeping, it’s ridiculous. He seems to hit the hole every time. It worked quite well.”

England captain Moeen Ali: “It was a brilliant win. We were reckless, especially with the bat.

“The future is great for England cricket with the players we have coming through.

“Mark Wood played serious, serious pace. It’s great to have him back, he’s a massive part of our team. At the World Cup we need him firing like that.”

Pakistan captain Babar Azam: “We tried to get off to a good start again but the early wickets put pressure on us.

“In situations like this we try to use the best bowlers but we just weren’t up to the mark and England bowled really well.”

English bowler Mark Wood speaks to Sky Sports: “It’s been a long time. I felt pretty tired at the end with the intensity of international cricket, but I’ll be good to go again.

“The challenge now is to back it up. What’s important is not to go too hard now and mean I’m not ready for the World Cup. I have to peak at the right time.” 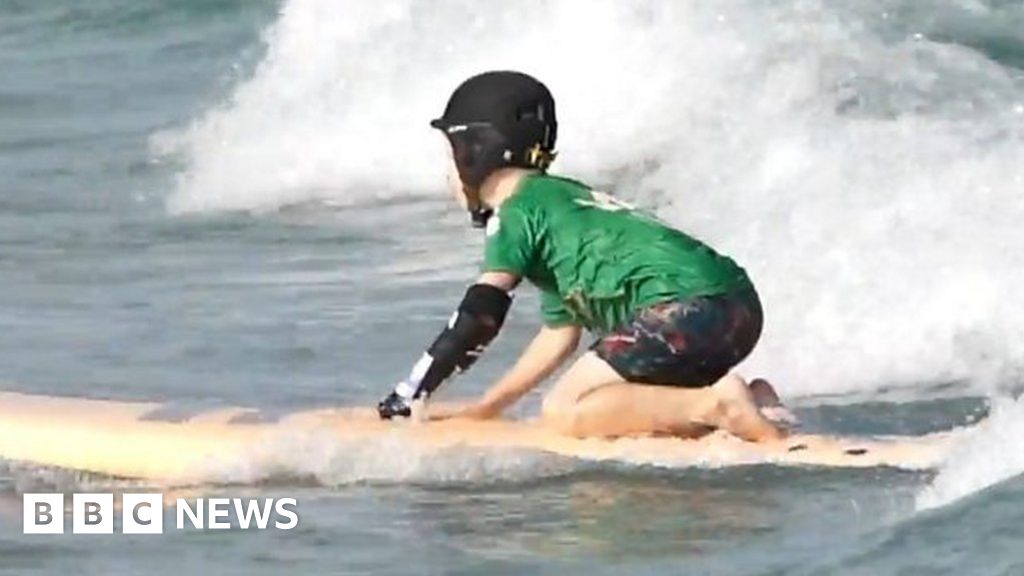 Joe Joyce v Joseph Parker: The Briton’s granite chin sees him through for an 11th-round knockout 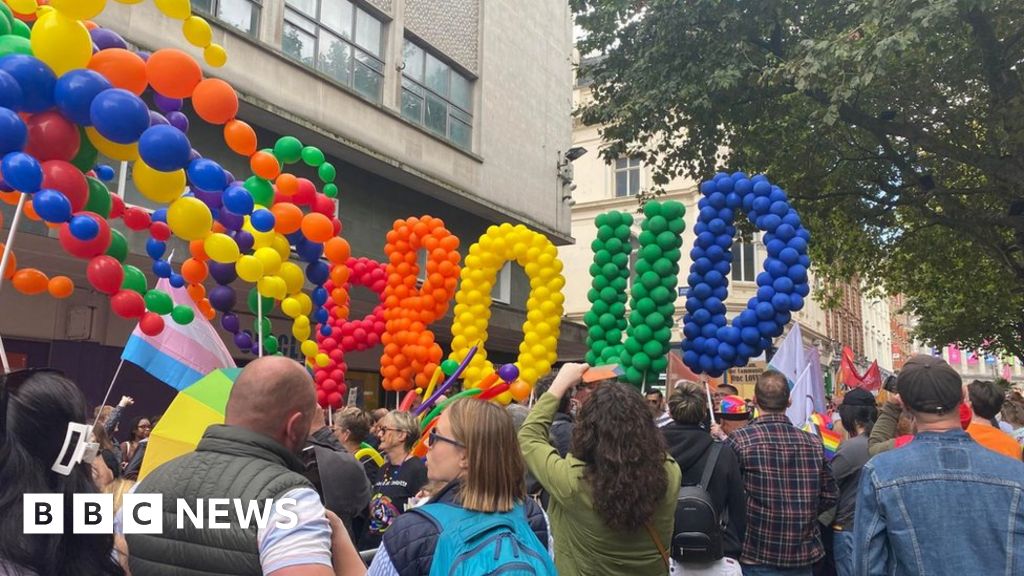