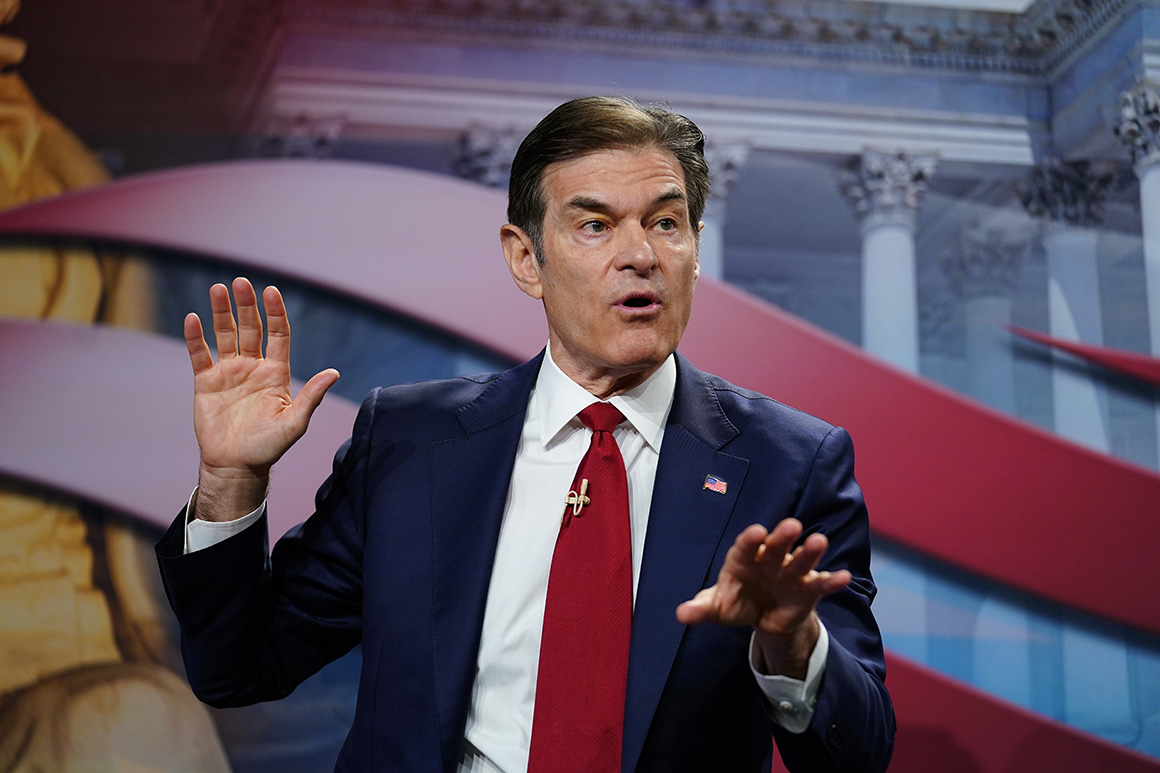 “Dishonest Dave is going on again,” Oz said, following a sting from McCormick over the celebrity doctor’s shifting views on fracking. “He went back to President Trump with this type of allegation. President Trump looked right through him, did not support him, and then he supported me.”

The race for Pennsylvania’s open Senate seat is one of the most competitive in the country, and it could determine which party wins the Senate majority. GOP candidates on Monday tried to appeal to Trump supporters, with almost all of them either supporting his lies about the 2020 election or raising questions about the voting processes that led to this year’s result.

But only Oz could highlight Trump’s nods – and he did so repeatedly. His success in the primary election will depend on whether he can convince the Republican voters in Pennsylvania that he is one of them. Millions of dollars of negative ads have criticized Oz as a “Hollywood liberal” and “RINO,” and he has been the subject of skepticism from some party activists over his previous views on key issues.

Throughout the debate, McCormick uttered a long list of Oz’s presumed apostates, often referring to the exact dates in the past when he made such remarks.

“Mehmet has the flip-flop on all major issues and you can go to his own comments. May 21, 2019, an interview with the Breakfast Club,” he said. “He basically said he was worried about the pro- life-movement that created struggles, and he was concerned that states introduced pro-life legislation, and he questioned when life begins at conception. “

Later that night, McCormick said, “You did a whole show on July 22, 2015, that was about 8-, 7-, 8-, 9-year-olds, and you supported those conversations about transgender transitions — surgical things, treatments that would be irreversible. “

Oz defended himself by referring to the statement made by Trump when he supported him, who called him “Pro-Life.” Regarding the remarks Oz made on his own show, he said, “I do TV shows, as I should, about views to be expressed on network TV.”

He also said he had been consistent with the Covid-19 policy: “How would you like me not to aggressively push back when I remember speaking clearly on the Sean Hannity show that we did not should keep our schools closed, and the amount of hate mail and posts that came out that effectively tried to cancel me out? “

McCormick, Oz ‘toughest rival, faced attacks because of his former company’s ties to China. Carla Sands, Trump’s former ambassador to Denmark, said: “Dave McCormick could never have earned the billions he made without bowing to the Chinese Communist Party.”

McCormick said he “served in our military for ten years and fought against the Communists, I negotiated at the highest level against the Chinese and other counties,” and that Bridgewater Associates, where he previously served as CEO, made only “2 percent of our business in China. “

At one point in the debate, conservative commentator Kathy Barnette Sands, who had boasted about her time in the Trump administration, knocked and yet was twice rejected by the former president for an approval.

“President Trump does not always get the best advice. It is unfortunate, but true,” Sands replied.

Candidates’ loyalty to Trump was put to the test overnight. Moderators asked if it was time for the GOP to move forward as Trump continues to talk about the 2020 election.

Oz said he had discussed the 2020 election with Trump and that “we can not move forward.” McCormick said it was a “tragedy” that most Republican voters in Pennsylvania did not believe in the integrity of the election.

Sands directed viewers to a film by right-wing extremist personality Dinesh D’Souza that supported election conspiracies. Barnette said the Republican Party “absolutely should not” go past the 2020 election.

Only Jeff Bartos, a real estate developer, reset 2022 midway through his response.

“Unfortunately, Joe Biden is president,” he said, arguing that “Americans will come forward with one loud voice” in November, and “we will get historic victories.”