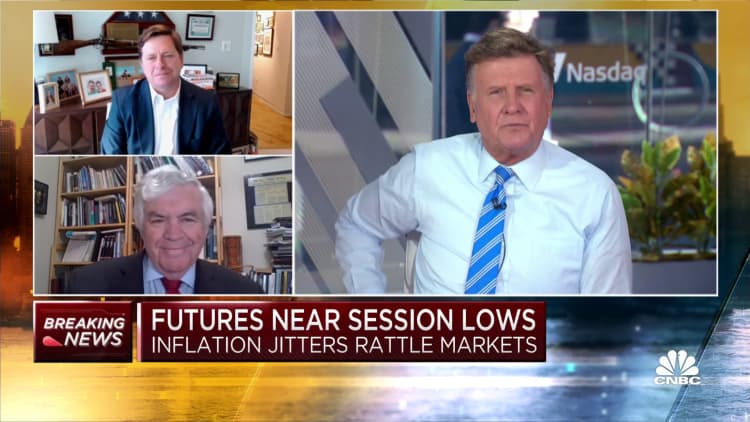 Stocks fell on Thursday, giving back some of the previous day’s rally as a drop in Apple shares weighed on the major averages.

The sale was broad-based. At one point during the session, only three stocks in the S&P 500 were trading higher. There are now five winners in the broader market index.

Apple shares fell more than 4% after Bank of America downgraded the tech stock to neutral from buy and cut its price target, citing weaker consumer demand for the iPhone maker.

“When you get to that level of concentration, you also want more volatile indices,” said Robert Cantwell, portfolio manager at Upholdings. “Apple just wants you to think it’s a macro problem as opposed to a product cycle problem. But the reality is they’re dealing with both right now.”

A stronger-than-expected jobless claims report did not help sentiment, building on the notion that the Federal Reserve will continue to aggressively raise interest rates to fight inflation without concern that it will hurt the labor market.

The 10-year US Treasury yield rose to trade at around 3.753%. The day before, it posted its biggest one-day drop since 2020 after briefly peaking 4%.

The moves followed a broad rally for stocks on Wednesday as the Bank of England said it would buy bonds in a bid to help stabilize its financial markets and the cratering British pound. Sterling has bowed to record lows against the US dollar in recent days.

The Dow rose more than 500 points, or 1.9%, on Wednesday, while the S&P 500 rose nearly 2% after hitting a new bear market on Tuesday. Both indexes snapped six-day losing streaks.

“For a more sustained rally, investors need to see compelling evidence that inflation is coming under control, allowing central banks to become less hawkish,” UBS’s Mark Haefele wrote in a note on Thursday.

Wednesday’s rally put the major averages on pace for a losing week and their worst month since June. The Nasdaq Composite is leading the monthly losses, down about 9%, while the Dow and S&P are on track to close 7% and 7.7% lower, respectively.