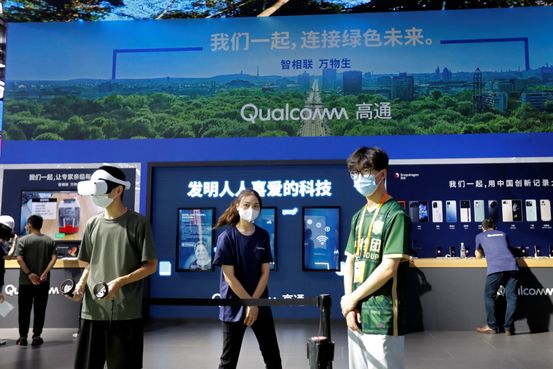 again lowered its forecast for smartphone shipments and gave a gloomier-than-expected sales outlook, joining other chipmakers facing a sharp turnaround in consumer demand after a pandemic-fueled boom.

The mobile phone chip designer cut its forecast to a low double-digit percentage decline from a previous forecast of a mid-single-digit decline, indicating that the downward trend in the handset market is accelerating. Qualcomm, in reporting quarterly results on Wednesday, said it expected up to $10 billion in sales for the current quarter, far short of Wall Street estimates of about $12 billion.

The San Diego-based company cut its forecast for 5G handset sales this year to as many as 650 million from an earlier forecast of up to 700 million. Earlier this year, it expected shipments of more than 750 million units.

A weekly digest of tech reviews, headlines, columns and your questions answered by the WSJ’s Personal Tech gurus.

The company also said Wednesday it would supply most of Apple Inc.’s

new 5G iPhones next year with so-called modem chips that coordinate communication between phones and cell towers. Qualcomm had previously estimated that it would supply only about 20% of these chips, suggesting that Apple’s efforts to develop its own modem chips and replace Qualcomm’s have not moved as quickly as expected.

Although phones have been a drag on Qualcomm’s business, the company’s sales are still rising as it gains market share in chips for Samsung Electronics co.

s flagship smartphones and because it is diversifying into other markets, including the automotive sector, which have been more resilient.

Qualcomm said sales in the latest quarter rose 22% to $11.4 billion, above what analysts in a FactSet survey expected. Net income rose 3% to $2.87 billion, below estimates.

The company’s shares fell about 5% in aftermarket trading.

Many chipmakers are going through a rough patch after profiting handsomely from the booming demand for electronics during the shift to working and learning from home. Slower hiring, reduced capital investment and cutbacks in factory production have become the norm in the industry.

is aggressively cutting costs and starting targeted layoffs to deal with a sharp decline in the PC market. Advanced micro-devices Inc.,

rival Intel gave a gloomy outlook for PCs on Tuesday, predicting a further drop in fourth-quarter sales after a rock-solid third quarter. The overall PC market could decline by close to 20% this year, CEO Lisa Su said on a call with analysts.

The broader technology sector has been challenged by a worsening macroeconomic environment, including higher interest rates and rising inflation. Amazon.com Inc.,

have all presented bleaker than expected forecasts for sales.

Qualcomm said its revenue from handsets in the latest quarter was $6.57 billion, up 40% from last year. Its Internet of Things business grew 24% to $1.9 billion in sales. Sales to the automotive industry increased by 58%, although this business remains a relatively small part of the company’s total revenue.

While chipmakers whose fortunes are tied to consumer electronics have fared poorly in the recent period of turbulence, those focused on automotive customers have fared better. Automakers are still struggling with chip shortages that have led to production cuts, including at Toyota Motor corp.

which said Tuesday it was lowering production targets for its current fiscal year.

Dutch chipmaker NXP Semiconductors NV, which derives most of its sales from the automotive industry, this week reported a 20% rise in sales for its latest quarter, citing continued resilience in its key markets despite growing economic strains.

Kurt Sievers, NXP’s chief executive, said in an interview that the chip industry has moved from a broad-based increase in demand to a more fragmented one, where pockets of demand persist but consumer-related businesses are slowing.

“The world is now very divided,” he said. “You see this across the entire chip industry.”

Write to Asa Fitch at asa.fitch@wsj.com