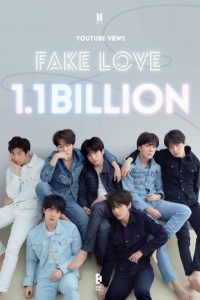 Early in the morning of April 23, the number of YouTube views of the music video for “FAKE LOVE” was the title track on BTS ‘third full album LOVE YOURSELF 轉: Tears, exceeded 1.1 billion. The Septet ticked the milestone about three years, 11 months and four days after the issue’s release on May 18, 2018.

In addition, “FAKE LOVE” will be BTS ‘sixth music video to reach 1.1 billion views on YouTube. Other music videos by the group that have previously achieved the record were “DNA”, “Boy With Luv (feat Halsey),” Dynamite “and” MIC Drop (Steve Aoki Remix) “and” IDOL. “It is noteworthy that they also is the only group around the world to achieve the milestone with six music videos.

Almost four years ago, RM, Jin, Suga, J-Hope, Jimin, V and Jungkook got a lot of attention around the world with their captivating “FAKE LOVE” era. They scored No. 1 on the Billboard 200 with LOVE YOURSELF 轉: Tears for 15 consecutive weeks, making them the first Korean artist to top the hit list. Their title track also hit the Hot 100 chart for six weeks in a row.

The music video for “FAKE LOVE”, which expresses the feelings of a dark parting after realizing a false love, catches the eye with BTS ‘intense performance and the sensual and sophisticated visual beauty that goes back and forth between the colorful sets.

The restaurant owner taps baby compensation – gives it away for free