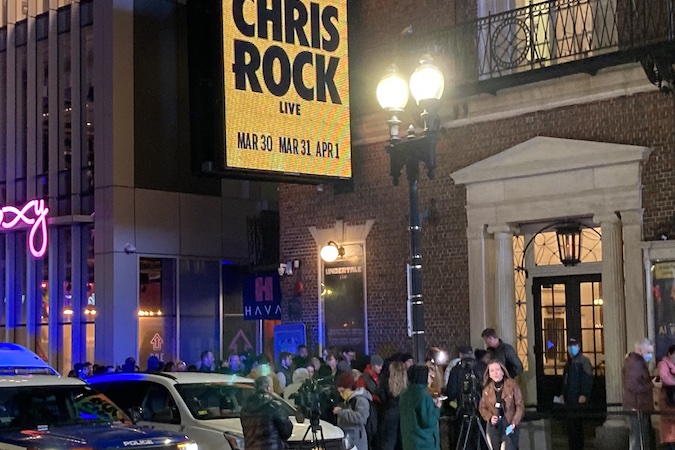 Bruce Willis walks away from acting after several years of struggle; Chris Rock tells jubilant fans that he “still treats” but that he can expect some jokes soon; and refused Will Smith to leave the Oscars? All in today’s Movie News Rundown, which you can sign up for here.

Bruce Willis: Praise and love for Bruce Willis has poured in since the actor’s family announced on Wednesday that he is “stepping away” from acting due to aphasia, a disorder that affects one’s cognitive functions.

This year’s match: A few hours after the announcement from Willis’ family Los Angeles Times published a deep-dive story describing years of hardship for Willis and his team as he attempted to perform his job on filming. It tells how his team, for example, would use an earpiece to feed him lines, and describes an incident in which he is alleged to have fired a gun (filled with blanks) at the wrong time. One of the two journalists who wrote the story tweeted that they had “over 20 sources. ”

May I speculate: The story has clearly been underway for a while, and I suppose the decision to step away was hastened by the awareness of its impending release.

Everyone else’s speculation: That online answers to the article is interesting and there is a complex debate as to whether it should have been written. Some see it as a violation of Willis’ privacy, while others argue that the purpose of the article was to ensure that Willis is not exploited. There is also a legitimate discussion here about on-set security for Willis and others, especially when weapons are involved.

Bon appetite: What everyone agrees on is wishing Willis the best. “All my love and respect for my big brother Bruce Willis, ”he wrote The sixth Sense author-director M. Night Shyamalan. “I know his wonderful family surrounds him with support and strength. He will always be the hero on the poster on my wall as a child.” Kevin Smith, who directed Willis Strikes outadded: “He loved to perform and sing, and the loss of it must be devastating to him.” Former United States Representative Gabrielle Giffords, who has had aphasia since surviving a 2011 shooting, wrote: “I’m thinking of Bruce Willis and his family today. Aphasia makes it hard for me to find the right words. It can be lonely and isolating, however @FriendsAphasia trying to change it. To all who live with aphasia, I am here for you. We got it here. “

Great reading: IndieWire has this exclusive Oscar journal from Pedro Almodovar that is as exuberantly charming and generous as his film. He talks about run-ins with Zendaya and Denis Villeneuve Paul Thomas Anderson Al Pacino, to whom he said, “You, Al Pacino. Me, Al Modovar.” His humane values ​​shine through. It’s really nice reading.

Will Smith: To anyone who says the Academy of Motion Picture Arts and Sciences should have thrown Will Smith out of the Oscars for beating Chris Rock, the Academy would like to say, Yes, we thought so too. “While we would like to clarify that Mr. Smith was asked to leave the ceremony and refused, we also acknowledge that we could have handled the situation differently,” the Academy said in a statement Wednesday, reported by Variety and other. The statement also said the Academy will hold a board meeting on April 18 where it can take disciplinary action, including suspension or expulsion.

Update: After this Rundown originally aired, Variety released a follow-up report saying there are conflicting reports as to whether Smith was formally asked to leave. These accounts are, of course, anonymous, so it is impossible to assess their truth.

Meanwhile, in Boston: Chris Rock received an approximately two-minute standing ovation in his first standup set since The Slap. He told the cheering audience at the Wilburn Theater: “You all got me foggy and shit,” he went on to explain that he was “still working on” what was happening, but would definitely talk about it at some point. “So at some point I’ll talk about that shit. And it’s going to be serious and it’s going to be fun,” Rock told the audience The Hollywood Reporter.

But what was Al Modovar thinking? He refused to let The Slap overshadow his Oscars and rightly focused on victories that pleased him – Drive my car! Summer of soul! – instead of the negativity. But he eventually shares: “What I saw and heard evoked a feeling of absolute rejection in me. Not only during the episode, but also afterwards in the speech of thanks – a speech that was more like a cult leader. You do not defend or protect the family with fists, and no, the devil does not take advantage of key moments to do his job. ”

The bonfire of vanity: Many people like to knock Brian De Palma’s 1990 bomb The bonfire of vanity, but I love Bruce Willis in it. He plays a dingy tabloid reporter who gets drunk to own the story of his life, about a Wall Street champion in the universe (a miscast Tom Hanks) accused in a Bronx hit-and-run. The film obviously has some issues, but Willis is one of its highlights.